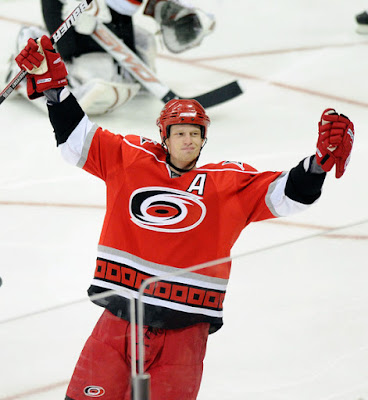 Eric Staal was named the Carolina Hurricanes captain today. My question is why now--- why not two years ago?? While Rod Brind'Amour should be commended for his years of service in the NHL and the lore behind him, in this day-in-age, it's almost a lead by example kind of role. This is why you saw young guns like Mike Richards and Jonathan Toews being named captain early on because they are character players.

Yet, you have to wonder how many times the captaincy change is long overdue. The Southeast Division alone has had two captaincy changes that have seemingly been long overdue. The Staal situation this time and a few weeks back Chris Clark getting traded from Washington, thus giving the captaincy to Alex Ovechkin-- with Clark being the stop-gap of captains so that Ovechkin got more comfortable with the language and leadership role. Both you could almost see happening at anytime, with some saying (especially in the Caps situation), the team already belonged to the next in line and it was a matter of time. At least in the Caps case, they traded him away. You have to wonder what will happen in the Canes locker room with Brind'Amour still being there-- maybe peering over at Staal and putting him under a microscope at every turn. While Brind'Amour may have had veto power and not used it, you can still bet there's something stewing deep inside him that's not sitting right.

While a stop-gap is alright, it almost seems like a slight to the guy you name captain. In Clark's case, everyone knew that it was Ovechkin's team; but why did they have to put the "C" on him?? It could have been due the youth of the team needing some kind of figurehead and Clark was the most experienced one there. What makes it interesting is the cases of the Montreal Canadiens and Toronto Maple Leafs of this season, where they have no captain. They have guys who could be put into that role, but yet-- nothing has come from it. Does that speak to the lack of leadership the vets on that team have or that they don't want one guy to stand out on a team full of leaders?? Obvious, the examples could be fit to the teams very easily if you think about it.

How do you know if a captain has worn out his welcome and when does it start becoming a distraction?? Most of the times, the captain get striped of his "C" due to fights with management, like Alexei Yashin in Ottawa, just being replaced by new blood like Mike Modano in Dallas, or the coach calling a player out like in Patrick Marleau's case this past summer in San Jose. Other than that-- it's almost due to the captain leaving to free agency, retirement, or in a somewhat rare case-- trade, where a captain loses his "C" from a team he was on. At least in Marleau's case, it woke him up for the regular season, but the true test for him will be in the playoffs. As far as wearing out a welcome, how much of a shot in the arm is it for the team, especially knowing they let their leader down. If the captain isn't safe from being targeted, you can only imagine how the players feel when it comes to whether or not they will be next to be called out, demoted, or even sent off the team.

Conversely to letting your captain down, what if the captain let the team down?? The fact of the matter is that Brind'Amour's play has been subpar at best in the past few seasons and really shouldn't have be a surprise that he could be wearing down physically. This is obviously a move that was in the making, but you would have only hoped that Brind'Amour would have been the one to announce he was stepping down as captain, rather than having the Canes management go up and almost run him down, so to speak, when it comes to stripping him of the captaincy.

By the way, the longest serving captain to date is Daniel Alfredsson since the 1999-2000 season.

While it's good for teams to actually excel their young stars into the leadership role, there's much better ways to do it than to trade away or strip your current captain of their role. Especially to do it mid-season, it has the ability to shake-up a teams psyche for the better or worse-- which is a delicate balance. Luckily, for the recent changes-- the Caps seemed to know the change was going to happen and were over it pretty quickly, while the Canes season couldn't get much worse. Even so, it may set a bad precedent for possible changes down the line.
Posted by ScottyWazz at 1:15 PM

Rod should have stepped aside (or retired) long ago and the reigns handed to EStaal. I feel a little embarrassed for him that JR had to essentially take the captaincy from him, telling him he's irrelevant (even though pretty much true), and giving it to the kid who was obviously next in line.