Then There Were 45/The Hall of Fame Debate 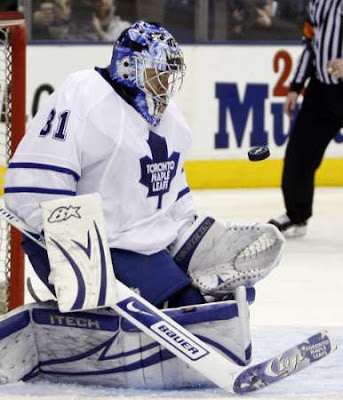 With the official announcement made yesterday, Curtis Joseph has retired from the NHL, thus another NHL '94 alumnus bites the dust and leaves us with 45 players left from the game. Joseph leaves the game with the fourth most wins by any goalie at 454 in 19 seasons of work. Of course, he also collected 352 losses, which ties Gump Worsley with the most losses in the NHL career of a goalie, but that's neither here nor there.

Joseph had a great career with six teams, three of them being in Canada-- but his most memorable times were with Toronto and Edmonton, where he is/was hailed as a folk hero for his service. Toronto especially, where he was a finalist for the Vezina twice, the Lester B. Pearson award once, and won the King Clancy Memorial Trophy for contributions in the community on and off the ice. His play was a big reason why the Leafs got to the Conference Finals in 1999 and 2002 and finished up his career there, even if it was a back-up to Vesa Toskala. Joseph is also the first goalie to win playoff games with five different teams (St. Louis, Edmonton, Toronto, Detroit, and Calgary). With all of this, you have to wonder how he was ever undrafted to start off with. Joseph is a three-time all-star, a gold medal winner in 2002, and he probably ate the bowl, too.

Of course, now, the focus turns to the Hall of Fame, which makes you wonder why there's any kind of discussion with all of this?? His numbers and play alone should make him a Hall of Famer, even if it isn't first ballot. Sure, Joseph doesn't have a Stanley Cup ring to his name, but is that the end-all be-all for someone who is on the fringe?? Albeit, he's the only goalie in the top-10 in all-time wins to not win a Cup, but all the same; the numbers should be something that should supersede the lack of the Cup ring. Not only that, but the effect Joseph had on the places he played need to be placed into the balloting of Joseph. He made the people of Edmonton and Toronto come alive and have hope, especially in the playoffs where CuJo built his legendary status. Even while his last years, post-lockout, were very forgettable; that shouldn't take away from what he achieved beforehand.

However, the lack of Cup ring could keep him out. If that's the case, you have to wonder how Mats Sundin will get in. Of course, that brings up another question of who meant more to the Leafs organization during that time, Joseph or Sundin-- but that's another topic for another time. Back to the lack of ring, the thing with Joseph has that guys like, let's say Dino Ciccarelli, don't have is the off-ice work he has done, not only in the community with CuJo's Kids, but reaching out with Right to Play and heading over to do work in places like Rwanda.

Yet, with guys with rings like Doug Gilmour waiting on the outside of the Halls, odds are Joseph will be passed over for the time being. It doesn't seem to effect Joseph, because he seemed like a happy-go-lucky guy in his career, even if he did take out a ref during the 2000 Playoffs. He came up from being born of teenage parents, being adopted by a different family of a mixed-race family, then going undrafted and fighting his way to get to the point where he was. He didn't seem too sad to retire, but odds are he's going to get into the coaching game sooner rather than later. Plus, he leaves a mark on having some of the best masks out there.
Posted by ScottyWazz at 10:05 AM