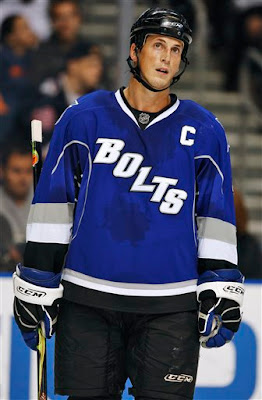 Everyone's favorite tin-foil hat wearer THN columnist Ken Campbell revealed in a piece today that the Tampa Bay Lightning could have traded Vincent Lecavalier to the Montreal Canadiens in June, but because part-owner Len Barrie refused it, Gary Bettman blocked the deal.

Sources say there was a deal in place last June to trade Lecavalier to the Montreal Canadiens for goalie Carey Price, center Tomas Plekanec and a prospect, but the deal was blocked by Bettman after Barrie refused to approve the deal. That caused a rift between Barrie and Koules that continued to fester and, combined with the financial problems both owners were having, put the Lightning in a state of flux.

Okay, now with the ABSURD amount of trade rumors with Lecavalier now (Campbell in the same piece saying the Kings are the front-runners; who seem to be front-runners for every big name now), this will only make them coming more and more if the Bolts are indeed sold to hedge-fund manager Jeffrey Vinik.

Yet, the trade that never happened that many wanted to happen is one of a head- scratcher, at least to me. You have to wonder why someone like Barrie would block the deal, especially when they saw the emergence of Steven Stamkos first hand.

It's a deal that would have made sense too, with the Bolts getting a bonafide number one goalie and not just back-up by committee they have going on now; to see which back-up is playing better to get starter's time. Price would have been out of the eye of the Montreal fire-storm and be able to flourish the way he would want, Plekanec would have been a solid depth player and secondary scorer, and Lecavalier would have been in his home and would have probably thrived under the pressure in Montreal....or crumbled-- either way.

Though, if that was the start of the ownership issues in Tampa, why would Barrie want to go down with the ship the way he did?? Sure, Lecavalier is the captain, but at the same time-- you need to know what is best for the team when things are planned out that way. It was a benefit to both parties, but Barrie didn't seem to see the forest for the trees; it would seem. Many would say Barrie is a good hockey guy, but this move makes you wonder who has been saying that. When you can get a top goalie and decent secondary scoring-- you could have been better off in the long-run by getting rid of the top dog and hoping the next in line can live up to expectation. You have to risk a lot to get a lot in return. Sport is all about potential since there aren't many sure things. This would have benefited both teams and Barrie effed it up.

Of course, all speculation since these are "sources" putting out the story-- yet Campbell, as critiqued as he may be in one form or another, is somewhat trustworthy when things of this nature pop up. It seems plausible too, given that Barrie seemed to be the one going crazy with ideas in the ownership partnership, thus blocking this deal for one reason or another isn't far fetched. Either way, we'll see if Lecavalier does in fact get put on the block if the ownership deal is pushed through-- whether it's this year, this summer, or even at all to this point. It seems Vinny has been traded plenty of times in his career, but still remains in Tampa.
Posted by ScottyWazz at 3:50 PM