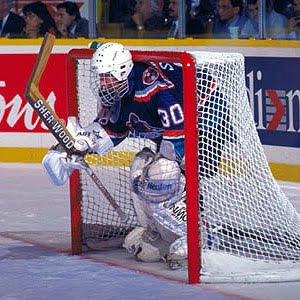 I've mulled this one over for a while, but thanks to Marc "with a 'C'" getting his new dome between the pipes, I decided to to ahead with it. There's a lot of quirks with this goalie, from his giant Great Gazoo Jofa helmet, all the way to his backside up against the middle bar when play was in the other end, then to no tape on the blade of his stick-- the goalie will be remembered for a while; even if his NHL career lasted five seasons. He overcame longshot to make a name for himself, as well as staying alive after a condition that could have ended his career before it started. This week's AGM: Tommy Soderstrom.

Soderstrom's career didn't get off the the greatest of starts. Playing in Sweden, Soderstrom was able to catch on with the Djurgardens IF Stockholm squad. Yet, even though he was the property of the team, Soderstrom was relegated to playing a small role on the junior squad of the team. He wouldn't see much time while playing in the Swedish junior leagues, and even though he was able to get part of the Sweden's silver medal in the 1989 World Juniors, he was becoming frustrated with hockey in general. However, during the 1989-90 season, Soderstrom got a mini-call-up by the Sweden's second league team, IK Viking Hagfors and went 3-0-0, only giving up three goals in those games-- including one shutout.

It was good enough for Soderstrom to get work in the Swedish Elite League with Djurgardens in the 1990-91 season. In the 39 games for Djurgardens, Soderstrom went 22-12-6 with three shutouts and was able to get Rookie of the Year honors from the Swedish league. Also, Djurgardens, on the back of Soderstrom, were able to capture another Swedish league title. The next season, another 39 games for Soderstrom, this time going 15-8-11 with four shutouts. Also in those two seasons, Soderstrom played for Sweden in the World Championships, winning Gold Medals in both of 1991 and 1992; winning the top goaltender award in 1992.

With all the buzz around Soderstrom, he got plenty of attention when it came to the NHL. Luckily for the Philadelphia Flyers, they had his rights after they drafted him in the 11th round of the 1990 Entry Draft. The Flyers then decided to bring him over in order to fill the void left by Ron Hextall. Soderstrom started off in the AHL onces coming to North America to play with the Hershey Bears. Soderstrom has a solid display in his seven games in Hershey, going 4-1-0; which was enough to warrant a call-up. Thankfully, the competition of Dominic Roussel and Stephane Beauregard for the 1992-93 season wasn't much match for Soderstrom who took over the starting role immediately. In the 44 games that year, Soderstrom went 20-17-6, which wasn't too bad for his first year in a new country.

Yet, it could have all came to a quick end. Soderstrom had Wolff-Parkinson-White syndrome, which is a blockage of electrical pulses to the heart. With the pace of a game in the NHL, Soderstrom was in and out of the hospital to deal with procedures when it came to WPW. He had to undergo surgeries in the tail end of the 1992-93 season and to start of the 1993-94 season to fix his issues. It didn't put him at a long-term injury and brings up thoughts of a current day Swedish goalie, Jonas Gustavsson, when these things come about. With WPW having a very quick sudden-death rate, Soderstrom is a lucky one in all of this.

However, with the 1993-94 season, it could have been the harshness of the surgeries or beginners luck; but Soderstrom started to play very weak. Playing with the Flyers, Soderstrom didn't fair well enough in his 34 games going 6-18-4 during that time, and then with time in the AHL with Hershey, going 3-4-1 in his nine games down there. With the inconsistency all around, Soderstrom wasn't as sought after as before, thus made expendable.

Before the 1994 lockout, the Flyers traded Soderstrom to the New York Islanders for Ron Hextall and a sixth-round pick in the 1995 Draft. After the lockout, Soderstrom started on a bad Islanders team and went through the motions with the team in his 26 games he played, splitting with Jamie McLennan going 8-12-3 with a solid .902 save percentage and respectable 3.11 GAA. In the 1995-96 season, the logjam on the Long Island started, as well as the fisherman era jerseys. Soderstrom was the starter, but would see young goalies like McLennan, Tommy Salo, and another AGMer Eric Fichaud getting chances to filling for Soderstrom's spot. Soderstrom still got 51 games in, but went an abysmal 11-22-6 with a 3.87 GAA and .878 save percentage. Yet, with the influx of the young goalies, Soderstrom was relegated to the minors for the 1996-97 season with the Utah Grizzlies of the IHL. Soderstrom only played 26 games behind Mark McArthur in Utah and went 12-11-0, which got him a brief call up to Rochester Americans of the AHL for two games, going 2-0-0. Soderstrom got one non-decision game in with the Islanders in October playing 10 seconds, but that was it for the NHL career.

After then, Soderstrom would return to Sweden to play with Djurgardens again starting in 1997-98, with a great return. That season, Soderstrom had the best GAA in the Swedish Elite League (2.24), had the best save percentage (.916), was the league MVP, and got Djurgardens to the finals, but lost. The 1998-99 season wasn't so kind, with his GAA still being decent at 2.75, his save percentage was down to .897. Soderstrom saw a limited role in 1999-2000 as a back-up, to Mikael Tellqvist, but was able to leave on top with Djurgardens winning another Swedish Elite League title. After that, Soderstrom would retire.

Through it all, he was able to make a big buzz for himself and then overcame many healthy issues to get to the peak of the hockey mountain. While it was short-lived, Soderstrom's look will be very memorable for many. He made his name in Sweden and seemed to have kept his great play there, as well. At least he never forgot his roots when he retired and helped his team to another championship into retirement.
Posted by ScottyWazz at 8:30 AM

Look at that cage.

Seriously, look at that fucking cage!