My Team USA and the Real One 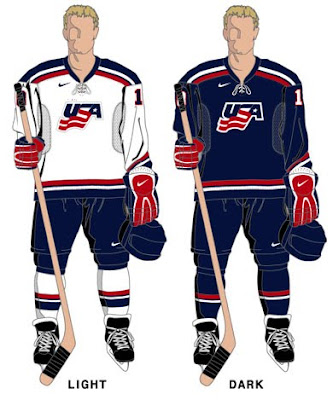 If you remember last week, I talked about me and my boy J-Rock doing our picks for the Canadian team. We also did the USA team in whole and part of Russians team. Oddly enough, we did better in the USA team.

However, I'm surprised that Quick got the call over Anderson. Sure, it's really for the third goalie slot who may not play throughout the whole tournament; but still. Shocking how Anderson's quick rise really wasn't enough to counter Quick's rapid rise. It is what it is-- neither will play with Ron Wilson saying he'll probably ride one goalie the whole way.

The forwards were a crap shoot. I'm very surprised a guy like Gionta, who has a lot of scoring power, was overlooked. Knuble is a mucker and grind guy, but seems like Callahan is a bit more of a younger Knuble and will be in the system longer than Knuble would; which makes sense in terms of grooming him for the organization. Ryan hasn't had the best start to a year after a great rookie season, but Burke always seems to be high on him; since picking him second overall in the 2005 Draft. I guess the Backes thing is for the 13th position and can fit in anywhere. Pavelski is a under-the-radar pick that could definitely help for secondary scoring.

While we never got done the Russians, we did fairly well for guys biding our time stocking shelves. We just need a team to pick us up and make us part of management, and we're golden.
Posted by ScottyWazz at 11:40 AM