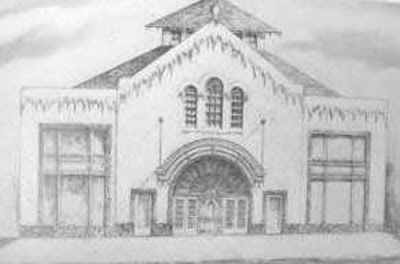 Many months back, I talked about how I was hoping to do something in regards to the history of hockey when it came to Baltimore. And while I'm not one for doing research for things, this one had to be done in a type of research way since there's not much on the internet when it pertains to 19th century hockey. It took some toiling and some asking, but I found probably some very interesting information in regards to early hockey in the Baltimore area. Today, we'll start with the start of indoor hockey, the first artificial ice rink.

I will say, Baltimore has never really been known for having the best rinks in the past. Anyone who has skated at Benfield Pines or Patterson Park rinks can attest to that. Yet-- somehow, someway, the early pioneers of the indoor skating concept got it right and it happened in Baltimore, no less. The rink was located, as far as I can tell, near where St. Mark's Evangelical Lutheran Church is between Charles and St. Paul Streets, along 20th Avenue in Baltimore. As far as I can tell, the exact location of the rink wasn't designated and it is now a vacant lot.

The exact dimensions of the rink were described thanks to an except from the Baltimore Sun from December 27th, 1894 a day after the North Avenue Rink (later known as the North Avenue Casino and Sports Centre) first opened.

The building is of brick with a graystone front and iron roof, and is 75 feet by 300 feet. The skating surface is 55 feet by 250 feet on a foundation resting solidly on the ground. Seven consecutive floors were laid with interlinings of waterproof paper and wool. On this foundation is build a seamless pan, which contains the artificially frozen ice for skating. Over three and one-half miles of one and one-half inch pipe are laid throughout the pan. This is covered by four inches of water, which is frozen solid to 100 tons of ice in 37 hours.

Saying it in an old-timey voice makes it even radder.

Now, for such a task to happen, you'd need a nuclear winter in most cases for that kind of speed in that day in age. However, someone, somewhere in Baltimore thought of a refrigeration system to which they probably rejoiced by throwing their index-finger in the air going "EUREKA!!" before stroking their beard in a old-timey way. Here comes the science.

The refrigerating system is by means of compressed liquefied ammonia allowed to expand in the pipes running through a brine tank. A zero cold results. The cold brine is then pumped through the pipe in the rink tank by the force of a 60-ton engine. The water is thus frozen into a solid mass of clear ice.

So simple, yet so complex at the same time. While many folks back in the day only know of the outdoor skating, the indoor facility provided a nice comfort from the weather that came with skating outdoors. The North Avenue Rink make sure to cover that bit of annoyance thusly.

Around the skating surface is a promenade floor about two feet higher and separated from the rink by a solid partition. Gas stoves warm this part of the building in order to keep comfortable the spectators, who are provided with seats.

There you go, the first skating rink around happened and it was in Baltimore of all places. The rink opening saw the Johns Hopkins University team take on the Baltimore Athletic Club team, playing to a 2-2 draw after their two-30 minute halves, which is another post for another time in the near future. After the game, the people in attendance were allowed out on the ice to test it out for themselves. The game brought out many interest onlookers from the Baltimore area, as well as some from as far north as New York.

It was a marvel for it's time, which is now in most every town around North America and overseas. Yet, it's odd how the times have changed where many are calling for more outdoor games, while back then-- many were calling for an indoor game every once and a while. And to think, the lore that the refrigeration unit was moved to the present-day First Mariner Arena.

I would like to thank Mr. Geoff Zonder, archivist of Yale University for pushing me in the right direction for getting this information, as well as the information in the upcoming post on the subject matter.
Posted by ScottyWazz at 9:40 AM

Hi, I have been looking for a pic of the Sports Center for about three years. I spent most of my teen years there. I played hockey for Poly and was on the ice there at least three hours every day they were open. My last year was in '52 when an "outlaw" roller hockey group came there. I came with the rink and started out selling programs, moved up to ref and did a little skating. They left and I went on to Ga. Tech.

Some of what you've posted is inaccurate, but you were never there. As an adult, I lived only a few blocks the rink was located. It was on North Ave between Charles and St. Paul Sts. 20th St is the street behind the rink. The ice surface was probably 50 x 150. There were seats on the south and west sides. Solid wall behind the boards on the east side. The pro was Norvill Bapttie (sp) a Canadian and inventor of the modern tubular hockey skate. He lived and died there. 360-676-1056 give me a call any evening. playing hockey during the day.

Hey Stu, good to hear from someone who was able to be around that area during that time.

Most of what I got in terms of ice surface and all of that is from the actual article out of The Sun, but the print was a little hard to read when transferred to PDF format.

I may take you up on the call some day. Thanks for reading and sharing some memories.