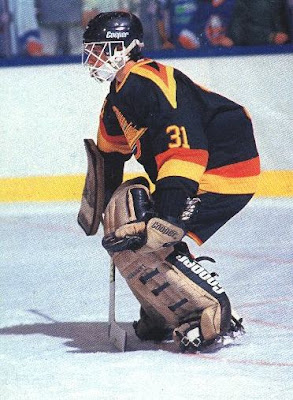 In this episode, we will look at a guy who; oddly enough, was able to play both major junior hockey and NCAA hockey in his career. That's something you couldn't do nowadays, but his time in college got him the buzz, but once he got to the pros, he was never able to stick with a team for a length of time. However, much like other AGMs, he's in the coaching realm after his career-- it's time for Steve Weeks.

Weeks first started out on the scene in the 1974-75 season in the Ontario Midget leagues with the Markham squad before heading to the OMJHL with the Toronto Marlboros. Weeks only saw 18 games with the Marlies, with a 5.02 GAA. It didn't seem to be enough for the young Weeks, who made a move to the NCAA in the 1976-77 season with the Northern Michigan University Wildcats. It was a shaky year for Weeks, as he would go 7-7-0 in his 16 appearances for NMU. After he was more accustomed to the game, Weeks settled into his own for his sophomore season going 10-5-2 with a 3.31 GAA in 19 appearances. For his junior year, Weeks would start to get more appearances and take over the starter's helm with 25 games and went 13-8-2, enough to garner him CCHA second-team all-star honors and it set the stage for Weeks to make a big jump the next season.

For the senior season of 1979-80, Weeks put the Northern Michigan team on his back, going 29-6-1 with a 2.95 GAA for the season. It didn't hurt that NMU had five players over 50 points, including one Bill Joyce who had 96 points in 40 games, as well as Atlanta Thrashers' GM Don Waddell who had 50 points in 37 games. The spirited effort helped the Wildcats to the NCAA Championship game, where they lost to the University of North Dakota. Weeks had such a year that he was named to the NCAA All-Tournament team for the Frozen Four, as well as CCHA first-team all-star squad for the year.

It was a great starting point for his pro career with the New York Rangers, who had picked him in the 11th round of the 1978 Draft. Weeks would have to start the 1980-81 season with the New Haven Nighthawks in the AHL and played 36 games with them. It was a rough start, as Weeks went 14-17-3 in his rookie year and went 0-1-0 in his only appearance with the Rangers in that season. However, for the 1981-82 season, thanks to some crazy fate, Weeks was thrown into a starters role, as he made 49 appearances for the Rangers, in front of Eddie Mio, and Weeks did well for himself with a 23-16-9 record. It helped the Rangers get into the playoffs, but Weeks would only see four games (going 1-2-0), as Mio stepped up to take over the role for the playoff run. With Mio's big run, plus the acquisition of Glen Hanlon-- Weeks was splitting time between New York and the Tulsa Oilers of the CHL in the 1982-83 season. In the 19 games in Tulsa, Weeks sported and 8-10-0, but had a spiffy 9-5-3 record when called up by the Rangers for 18 games. While the 1983-84 season brought better NHL fortune with 26 games with the Rangers, Weeks only went 10-11-2, so he had to be sent back to Tulsa. In his three games, Weeks went a perfect 3-0-0.

Before the start of the 1984-85 season, the Rangers traded Weeks to the Hartford Whalers for the ever popular future considerations. Weeks started off in Hartford, but got off to a mediocre 2-5-0 start and got him a trip to Binghamton to play in the AHL. While in Binghamton, Weeks went a perfect 5-0-0 with a 2.57 GAA. Weeks went back up to Hartford, finishing 7-7-2 for the rest of the season and 9-12-2 for the year. His play was good enough to get him in Canada's World Championship team, going 3-1-1 and getting a silver medal for it. The 1985-86 season saw Weeks up in Hartford backing up Mike Liut and getting 27 games of action, going 13-13-0 for the season. More of the same in the 1986-87, but with less games and a better record (12-8-2 in 25 games). The 1987-88 season saw Weeks play 18 games with Hartford going 6-7-2, which turned out to be an audition to be traded.

At the trade deadline in 1988, Weeks was shipped to the Vancouver Canucks for Richard Brodeur. Weeks was able to get nine games end out the season with a 4-3-2 record. The 1988-89 season would see Weeks split some time with Kirk McLean on a subpar Canucks team. Weeks went 11-19-5 in his 35 games played. The struggles continued in the 1989-90 season for the Canucks and Weeks, who got less time with only 21 games and went 4-11-4 for the season. The 1990-91 season saw Troy Gamble push out Weeks to the IHL and the Milwaukee Admirals. With Milwaukee, Weeks went 16-19-0 for the year and 0-1-0 in his only appearance with the Canucks in November of 1990. The Canucks traded Weeks to the Buffalo Sabres for more future considerations, but Weeks never played in Buffalo.

In the off-season, Weeks was able to catch on with the New York Islanders as a free agent for the 1991-92 and he would spent just a half-season with the Islanders before being a casualty to a logjam where former AGM Mark Fitzpatrick and Glenn Healy won out. With the Islanders, Weeks went 9-4-2, but was dealt to the Los Angeles Kings for a seventh round pick in the draft. Weeks would only spend seven games in LA, going 1-3-0.

That summer, Weeks signed with the Washington Capitals, but never played a game, as he was left unprotected in the Expansion Draft and then was traded Ottawa Senators afterwords for future considerations. Weeks would spent a small time in Ottawa, going 0-5-0 in his seven games on the rosters and was sent down to a familiar place, New Haven, this time a member of the New Haven Senators. In New Haven, Weeks lost all six appearances-- which led Weeks to retire after that season.

Weeks didn't stay long away from the rink, as he went back to Hartford to be the goaltending coach for the Whalers starting in the 1993-94 season. Weeks spent eight season with the Whalers/Carolina Hurricanes with various positions-- like goalie coach, assistant coach and scout. Weeks was signed up by the Atlanta Thrashers as a goalie coach in 2001 and still with them to this day.

Weeks had plenty of ups and downs and was mostly a casualty of too many goalies being in the same place and Weeks not being able to deal with the pressure of it and faltering. He's moving along to the coaching side and seems to have good enough results to having longevity in the position that he's in, especially with one organization or another.
Posted by ScottyWazz at 8:30 AM