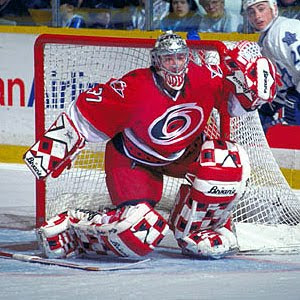 Since it's the time of year for the World Junior Championships, I should probably key in on someone who has been there before and won two championships with his country-- one as a back-up and one as a starter. And while his international success was not to bad, his subpar play when he was in the professional ranks is what people will remember him most for. At least he has some of the most rememberable pad sets of all time. Look kids, it's Trevor Kidd.

Thanks to his play with the Eastman Selects in Manitoba Midgets, Kidd was able to catch on solidly with the Brandon Wheat Kings of the WHL. Kidd was able to get some decent time as a back-up with the Wheaties, behind Kelly Hitchins, seeing 31 games. Kidd had an 11-13-1 record, which wasn't good enough to help the Wheat Kings into the playoffs. The 1989-90 season would see Kidd go right into the starter's role; getting 61 games and going 24-32-2. While he was able to get the Del Wilson Trophy for top goaltender in the WHL, he still couldn't help the Wheat Kings into the playoffs. Personal success came when Kidd was named to the World Junior team, but played back-up to Stephane Fiset, but got a gold medal out of it. His impressive season did get him plenty of buzz amongst scouts; which made Kidd the 11th overall pick in the first round of the 1990 Draft, as selected by the Calgary Flames. Kidd went ahead of Martin Brodeur (20th overall), which is a decision the Flames probably hate in hindsight. The move wouldn't have been if the Flames didn't trade with the Devils. That's right the Flames and Devils swapped first and second round picks the day of the Draft because the Flames wanted Kidd and knew the Devils would have pick him up ahead of them. The rest, they say, is history.

The 1990-91 season would finally give Kidd the success he had worked hard to get. While he started out in Brandon with a 10-19-1 record for the beginning of the season, Kidd was shipped out to the Spokane Chiefs, who would eventually be the WHL Champions and the representative of the WHL for the Memorial Cup. Kidd would take over the starting gig from Scott Bailey and went 8-3-0 in his 14 regular season games, with an astonishing 14-1 record in the playoffs. Kidd also won all three games in the Memorial Cup to close out a fantastic season for himself. That season included another trip to the World Juniors, where he started six of the seven games, capturing a second gold medal for himself.

The 1991-92 season had Kidd going here, there, and everywhere in between, with the Flames loaning out Kidd to the Canadian National Team. You see, back in the day of no NHLers in the Olympics, teams would loan out their prospects or lower-tier players to play for the National team, who would play in exhibitions throughout the world to get ready for the Olympic competitions. Kidd got a good amount of net time with the National team, playing 28 games and going a solid 18-4-4 in this tenure. Kidd would also be loaned out this third straight World Juniors team, but due to the turnaround of talent, the Canadians would finish sixth in that tournament. Kidd would only see one game in the Olympic Games in Albertville, France; which was a 10-0 destruction of Norway, but it was enough to get him a silver medal for his troubles.

The 1991-92 season also saw Kidd get his first taste of NHL action, playing in two games late in 1992, going 1-1-0 with a 4.00 GAA in his two games. The 1992-93 season had Kidd back in the learning process, playing with the Flames' IHL affiliate Salt Lake Golden Eagles for the season. Kidd fared okay in his first 30 games of professional action going 10-16-1 before falling to a leg injury in February which ended his season. To start the 1993-94 season, Kidd was up with the big club in Calgary, backing up Mike Vernon and held his own in his 31 appearances, putting up a 13-7-6 record and a 3.16 GAA. When Vernon departed after the season, it was Kidd's ship to steer, as he led the league with 43 starts in the lockout-shortened season of 1994-95 and put up an impressive 22-14-6 record with a 2.61 GAA and finished 7th in the Vezina Trophy balloting for the year. The playoff success wasn't too kind, however, as the Flames went out in the first round to the upstart San Jose Sharks in seven games. The 1995-96 season had Kidd sharing duties with Rick Tabaracci, but Kidd got a majority of the games. Yet, at the same time, he was the one with the worse record at 15-21-8 and a 2.75 GAA for the year, but only saw two games of playoff time, with the Flames bowing out in four games to Chicago. Kidd would regain his starter's role, this time over Tabaracci (who was dealt to Tampa early in the season) and Dwayne Roloson. Kidd's early season success to get Tabaracci moved wouldn't hold on as Kidd finished the year 21-23-6 with a decent 2.84 GAA and .900 save percentage.

A lot would change before the 1997-98 season, as Kidd and Gary Roberts were dealt from the Flames to the newly moved Carolina Hurricanes for Andrew Cassels and prospect Jean-Sebastien Giguere. Kidd would take the starter's role in a platoon of goalies, which included Sean Burke, Kirk McLean, Mike Fountain, and former AGM inductee, Pat Jablonski. Kidd played in 44 games, mostly due to missing seven games to a groin injury and seven games to a broken finger. Kidd went 21-21-3 with a great 2.17 GAA and .922 save percentage. The 1998-99 season wouldn't be so kind to Kidd. The Hurricanes had picked up Arturs Irbe from the Vancouver Canucks in the off-season, which gave him the starting role and didn't allow Kidd the time to get into the net as much. Kidd only got 25 games in the season, going 7-10-6, but still had a good GAA (2.86) and save percentage (.905). It was not enough, though.

Kidd was left unprotected for the Expansion Draft, for which he got picked up by the Atlanta Thrashers. However, his stay was non-existent as the Florida Panthers trade for Kidd in exchange for Gord Murphy, Daniel Tjarnqvist, Herbert Vasiljevs, and a sixth-round pick. Kidd made his presence felt in Florida quickly, going 14-4-2 in his first 21 games of the 1999-2000 season, but due to a freak accident in the Panthers' skills competition, Kidd was sidelined with a dislocated shoulder. He lost his only game in the AHL with the Louisville Panthers and then lost his next seven games back in Florida, putting him at 14-11-2 for the season, but better numbers with a 2.63 GAA and .915 save percentage. It was something Kidd could never recover from, especially after the Panthers picked up Roberto Luongo from the Islanders. The 2000-01 season saw Kidd and Luongo do battle for time, but Kidd's 10-23-6 record and dismal 3.31 GAA and .893 save percentage gave the nod to Luongo for the 2001-02 season. It was worse news that season as Kidd went 4-16-5 with a 3.21 GAA and .895 save percentage. With Luongo being the franchise of the Panthers, Kidd wasn't re-signed.

In August of 2002, Kidd would catch on as a free agent with the Toronto Maple Leafs. Ed Belfour was the work-horse on that team, which didn't allow Kidd to play much, which showed by his 19 games in the 2002-03 season. Even in those games, Kidd was suspect, going 6-10-2 with a 3.10 GAA and .896 save percentage. Kidd would see less time in the 2003-04 season, playing only 15 games, but with a better record of 6-5-2, but worse GAA at 3.36 and .876 save percentage, which would end up seeing Kidd lose his back-up role to Mikael Tellqvist. Kidd played one game in St. John's in the AHL, winning it and only allowing one goal.

Kidd would go back internationally, but not of his own doing. After waiting out as much as he could, Kidd went over to Europe in January of 2005 playing for HC Orebro 90 of the Swedish Third Division. Kidd played eight games with two shutouts and a 2.37 GAA. In May of 2005, Kidd signed with the Hannover Scorpions of the German Elite League, playing 45 games for them and going out with a 2.75 GAA and .907 save percentage, but no record is given, nor have I found them.

Though Kidd hasn't announced his official retirement, he hasn't been on a team since the end of the 2005-06 season with Hannover. Kidd has moved on, it seems, as he now owns the Mountain Bean Coffee Company, which has three locations throughout Canada.

Kidd never had it real easy in his career, but was able to perform very well under less than desirable circumstances. He had Junior success, International success, and minimum NHL success, but he did what he could with what was handed to him. He wasn't always on the best teams, but he always gave his teams the chances to win and chances to succeed. He just never seemed to get the help he needed.
Posted by ScottyWazz at 8:30 AM

holy wow those pads are burning my retinas.

I see what you did there...

Look at the pads carefully, the checkers are Hurricane Warning Flags. Very cool and creative I think.

It will be great to watch Hannover 96, i have bought tickets from
http://ticketfront.com/event/Hannover_96-tickets looking forward to it.