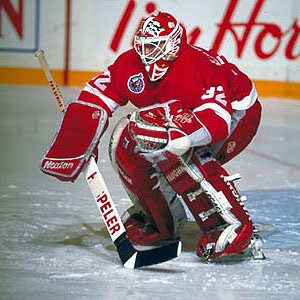 When you think Michigan and mainly Detroit, you often think about the automotive industry and the Red Wings. That couldn't have been hammered home more by this week's AGM. While his nickname coincided with a major player in the auto industry, his play was anything but solid. His career went from zero to 60 back to zero in no-time flat, it was a display of how "what have you done for us lately" is put into effect. This week, we put out the career of Tim "Chevy" Cheveldae.

As Cheveldae grew up in Melvillie, Saskatchewan; Cheveldae plied his craft with the Yorkton Mallers in midget hockey and then onto the Melville Millionaires in junior "A" hockey. His play was good enough to get noticed and picked-up by the Saskatoon Blades of the WHL. Cheveldae started with the Blades in the 1985-86 season splitting games with Mark Reimer. While Reimer got more starts, Cheveldae impressed in his first season with the Blades going 21-10-3 for his first year in juniors. Even as a back-up, Detroit took a shine to Cheveldae and selected him in the fourth round of the 1986 NHL Draft. The 1986-87 season saw more of the same with the Blades, but Cheveldae got less starts to Reimer; as Cheveldae got 33 games in and went 20-11-0. The 1987-88 season would see a big shake-up as Cheveldae was given the reigns to the Blades net and played an astonishing 66 games for the Blades, going 44-19-3 with a 3.71 GAA and seven assists on the season. After that season. Cheveldae got WHL First All-Star honors and would leave on top of his game in juniors.

Cheveldae would go straight to the AHL with the Adirondack Red Wings and would have a solid first pro season playing in 30 games behind Sam St. Laurent, going 20-8-0 in his appearances. His play would allow him to see two games in Detroit, losing both of them. The 1989-90 season would see Cheveldae split his season between Detroit and Adirondack. While in Adirondack, Cheveldae went 17-8-6 before turning the reigns over to former teammate Reimer as Chevy went up to Detroit to back-up Glen Hanlon from February of 1990 and on. Cheveldae went 10-9-8 in his tenure up in Detroit. That end-of-season push from Cheveldae gave him the starter's role for the next season.

The start of the 1993-94 season was an auspicious one, as almost 17 minutes into the season, Cheveldae went down to a knee injury. He would miss the next sixteen games and would come back after spending two games (1-0-1) in Adirondack. Cheveldae would spend another 29 games in Detroit going 16-9-1, but the Red Wings were unsure of their goaltending down the stretch, so they needed to make some changes.

On trade deadline day in 1994, the Red Wings dealt Cheveldae and Dallas Drake to the Winnipeg Jets for Bob Essensa and Sergei Bautin. Cheveldae would play 14 games that season with Winnipeg, going 5-8-1 to end out the 1993-94 season.

Cheveldae was traded to the Philadelphia Flyers in February of 1996 for Dominic Roussel, but Cheveldae would only see time in the AHL for the Flyers' affiliate in Hershey, going 4-3-0 in his eight games in Chocolatetown, USA.

In the off-season, the Boston Bruins signed up Cheveldae, but loaned him to the IHL's Fort Wayne Komets to have as an insurance policy. Cheveldae backed up Mike Torchia in Fort Wayne, only seeing 21 games for the season and going 6-9-4 in the process. Cheveldae was called up by the Bruins for two games, going 0-1-0 in those games. The 1997-98 season would see Cheveldae stay in the IHL for the Las Vegas Thunder, but it would be more woes as Chevy went 9-17-5 to end out his career.

After his retirement from pro hockey, Cheveldae jumped right into coaching with his old junior team, the Saskatoon Blades from 1998 until 2000. Chevy then went to the Moose Jaw Warriors to be the goalie coach starting in 2001. Currently, Cheveldae is the head coach of the Saskatoon Blazers a Midget AAA team in the Saskatchewan Minor Hockey Association.

While he had his time in the sun in terms of fame and notoriety, Cheveldae is now giving back to the system that gave him the chance to make a name for himself. Seeing the highs of junior hockey and then getting some kind of fame for a short time in the NHL, Cheveldae dealt with adversity in the limelight of his career and seems to have come out of it with a level head and look towards the future of things.
Posted by ScottyWazz at 8:30 AM