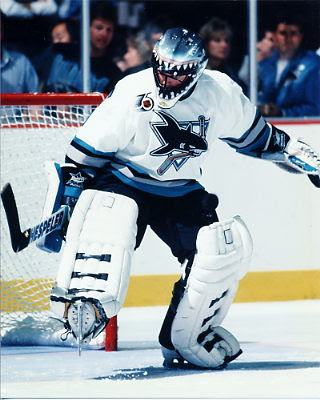 While most of the AGMs have been known for their play in juniors or college, then into the minors-- this inductee was pretty much known for his one unique mask and his work in the broadcast booth more often than not. We now turn to look at the career of Brian Hayward.

Growing up in Canada, junior hockey is the big thing. However, Hayward saw the bigger picture and wanted to get an education to further it if hockey didn't pan out. Being past on the junior draft after playing in midgets and Junior "A" helped his cause as well, but to get into an Ivy League School shows how smart he was, which showed why he went the education route as well.

Hayward jumped right into the the Cornell Big Red line-up as the starter for the team in 1978-79 and did very impressive with a 18-6-0 record in his 25 appearances, which got a bit of buzz on him. His sophomore season, Hayward felt the heat from a young Darren Eliot and got his starter's role usurped from him, only making 12 appearances and going 2-7-0 and having an inflated 6.02 GAA. During his junior season in 1980-81, Hayward got split duties with Eliot. Hayward got 19 games in and had a 11-4-1 record and got his GAA down to 3.54. In his senior season, Hayward got the majority of the starts, but his record was a little sloppier, going 11-10-1, even though he had a 3.17 GAA for the year; which got him a First-Team ECAC All-Star and NCAA All-American for his troubles. After his tenure at Cornell, Hayward left with those individual awards, as well as a degree in business management.

However, even with this business management degree; it couldn't get Hayward selected in the NHL Draft, which made him a free agent. The Winnipeg Jets saw something in him and signed him to a contract. In his rookie year during the 1982-83 season, Hayward split time between the Winnipeg Jets and Sherbrooke Jets of the AHL. In Winnipeg, Hayward got 22 appearances and went 10-12-2, while in Sherbrooke he went 6-13-3. The 1983-84 season was the same, but spent a lot of the time in Winnipeg with 28 appearances (7-18-2) and only 15 showings in Sherbrooke (4-8-0). Hayward would take over the reigns of the starter's role when the incumbent starter for Winnipeg, Doug Soetaert, was traded to Montreal. The 1984-85 season saw Hayward got 61 games for the season; recording an impressive 33-17-7 record with a 3.84 GAA, getting the Jets into the playoffs, but losing in the first round. The 1985-86 season was a slumping year for Hayward, going 13-28-5 and having a stint in the AHL with Sherbrooke (2-0-1); who had renamed themselves the Canadiens. It would be a foreshadowing of things to come.

Foreshadowing because Hayward was dealt in November of 1986 to the Montreal Canadiens for Steve Penney and the right to Jan Ingman. The Canadiens were coming off a Stanley Cup and Hayward would once again take over for Soetaert, who bolted for the Rangers that off-season. Hayward had great stats over his Canadiens years, thanks to not only backing up Patrick Roy, but for having a great team defensively in front of him. The 1986-87 season saw Hayward get 37 games in with a 19-13-1 record and a stellar GAA of 2.81. The next season, more of the same-- playing 39 games and putting up a 22-10-4 with another sub-three GAA of 2.86. Finally, in the 1988-89 season, Hayward got into 37 games and went 20-13-3 with a GAA of 2.90. All three of those seasons, Hayward won the William Jennings Trophy with Roy for fewest combined goals against for the season. However, it wasn't too last, as the wheels fell off of sorts for Hayward in the 1989-90 season, going 10-12-6 in only 29 games with a 3.37 GAA. His time in "La belle province" would reach its end.

After not being used by the Canadiens for the start of the season, Hayward was dealt to the Minnesota North Stars in November of 1990 for Jayson More. Hayward would take over the task as back-up as the Finn tandem of Kari Takko and Jarmo Myllys couldn't get the job done. Though Hayward wouldn't fair much better, he was plenty consistent, going 6-15-3, but with a 3.14 GAA. Hayward was sent down early to the IHL and the Kalamazoo Wings, going 2-0-0 in his two appearances. It was a short lived stay in Minnesota, however.

Hayward was put into the dispersal draft for the newly formed San Jose Sharks and was promptly picked up second behind Shane Churla. Hayward was thought be a great addition (and not just for his bitching mask), being deemed the starter and got off quick on a horrific Sharks team, winning the franchise's first game in October of 1991, but it would be his last as a back injury put him out for the season just 7 games in, with Hayward going 1-4-0 with a 4.92 GAA on the season. It wasn't much better for Hayward or the Sharks the next season. For Hayward, he got more games thanks to coming back, but went only 2-14-1 with a 5.55 GAA; while the Sharks came close to becoming the worst team in NHL history, but luckily went 11-71-2 with only 24 points on the season; behind the 1974-75 Washington Capitals and tied with 1992-93 Ottawa Senators, points wise.

During January of 1993, Hayward underwent season and career-ending back surgery. During his recovery time, Hayward would occasionally do color commentary for the Sharks. When realizing he wouldn't be playing any longer-- Hayward picked it up and would go on to have an impressive display. Hayward worked that season with the Sharks and would go on to work with ESPN (and ESPN 2), ABC, CBC's Hockey Night in Canada, as well as working the 2006 Olympics for NBC. Currently, Hayward is the color commentator for the Anaheim Ducks.

Hayward made a conscious decision to get into a good school and learn more about life after hockey, which seemed to help him. Hayward has been on the best of the best, the worst of the worst, and the middle of the middle. He's had his ups, downs, but came out with a solid career, some memories, as well as some hardware. Also, yet another goalie to be a color commentator for television, which would go on become a big trend once he started.

Posted by ScottyWazz at 8:30 AM