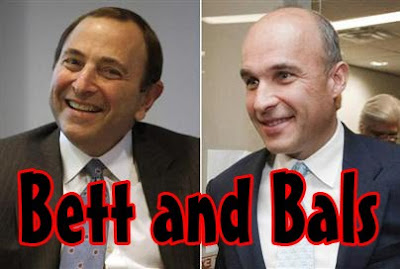 I've been pondering what to do next with B&B and thankfully-- news of a Quebec City meeting has come out, as has rumors of the NHL wanting to move Atlanta to QC in the next five years, even if it is a Tweet from a random person. Now, I been pondering what is going to happen if I had $20 million....
(We start out with Balsillie pacing in front of the couch, peeking at the TV waiting for Bettman to come back from wherever he went. Bettman has been gone for a week, never telling Balsillie where he was headed.)

Jim Balsillie: I hope Gary gets back soon. Man, do I have some questions for him.

JB: Don't "hi" me, you're killing me here. I've got tons of questions and you bolt on me without telling me what's going on. You don't think I'm not onto you, you don't want me to have this do you??

GB: Look, Jim-- it's just business. But, I think you can ask and I'll be open with you.

JB: No, why the hell would I want to to know about that. I'm drinking tap water like a dog because I can't find the bottle opener for the liquor.

GB: I think most are twist offs....but I've been in Quebec City for the week talking to them about getting a team out there.

JB: HAHAHA-- that's a riot. Why would play a cruel trick on them like that?? I mean, honestly Gar; that's just mean. Everyone knows that I'm going to be the next guy to get something in Canada.

JB: You're serious?? What did those Frenchies do to you mind, Gary?? They had a team in Quebec City and you allowed them to move out of there. I mean, you look at Atlanta and they get a team back and looks like they'll be mind soon enough.

JB: THEY'RE GOING TO BE MOVING TO QUEBEC??? SACRE BLEU!!!

GB: Funny, but there's rumors about them move up there if they can't get their asses in gear. But Quebec just failed due to the economy; because they had great fan support before they moved out. They just couldn't deal with a team due to money. If they want to get the Winter Olympics up there like has been rumored, they're getting a new arena in place, which could put them over the edge.

JB: Gary, Gary, Gary-- at what point do you think that this will all go down the crapper for them?? Do you think the economy will last for them up there and think they'll be viable?? They don't even speak English up there, what kind of chance do they have with all the Anglo folks we have around??

GB: You do know a lot of players speak French, right??

JB: Who, the real Frenchy Cristobal Huet-- he doesn't count-- he's from there.

GB: No, you moron-- there's plenty of French Canadians from Quebec who are playing in the NHL and can speak French. I mean, Montreal is a hub for French speakers who are a demanding market. I'm sure with you going to school in Canada-- you had French classes as well; it's a bi-lingual country, Jim.

JB: Whatever, Gary-- the only French I know is what I drop on game telecast. Fact of the matter is that they aren't going to be getting the government support if they start to fail-- which was shown back when they first had this issue. I don't think it's going to be a solid idea to give it to a troublesome place like that, which so much more political going on that meets the eyes. And so what if they have an arena being made-- look at Kansas City-- that things just sitting there looking like a giant disco ball with no one taking up residence.

GB: Kansas City is a great choice, but they aren't showing the interest like Quebec City. Plus, you get your seventh team like you marched for, right??

JB: But it's not MY team, Gary-- it's someone elses. And I mean, come on-- Quebec?? No one outside of Quebec cares about them or thinks of them as Canadian-- remember those separation votes??

JB: That's the last time I buy you any early 90s sketch-comedy DVD sets. Look, just take your coat off and stay awhile-- we have more pressing issues; bottle opener.

GB: I told you, they're twist-off. (Opens up closet)