At Least They Didn't Put "FLA" On The Front 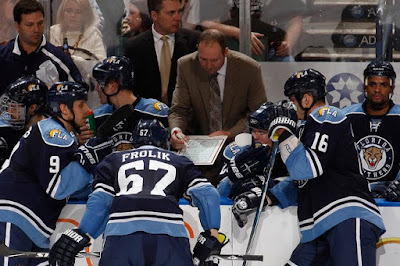 The Florida Panthers revealed their third jerseys on Monday night and it's....different.

As you see, it's got the mix of navy blue and baby blue and kind of rips off both the Pittsburgh Penguins thirds and the St. Louis Blues' third. So, as you can tell-- the creativity machine has been put into retirement with all of this coming to a head.

The logos themselves-- I have to say I enjoy the stylized panther-head logo. It's a little more sharper and modern than what they have on their regular jerseys. However, the sun logo with "FLA" on the shoulders....not a fan. Not only is it an eyesore to me and very out of place with the yellow sun standing out on the shoulder yoke, the FLA looks way too big for the logo and just not flowing with the rest of the scheme.

For a team who used to have a bitchin' red jersey design and solid foundation for jersey awesomeness; the templated piping with their Edge jerseys and unoriginality of their third jerseys, this is an ultimate example of horrific things can get if you don't have the best marketing team or any desire for creativity.

Though it just shows that blue is the new black. This year alone, the Predators went to a whole blue motif, the Avalanche going with the blues, combined with the other blue thirds out there (Blues, Sabres, Canucks, Pens, Isles, Oilers)-- it seems that any shade of blue is something that teams want to go to. You can bet the Capitals would have blues as a third since they don't have anymore options to go to, as well as the Rangers would probably go to a navy options like they did back in the day.

But in the end, there's more bad than good when it comes to the Panthers new thirds. It's something that could have been done a lot better, maybe even bringing the team back to their days of glory, when they made the playoffs and turned a lot of heads. Sadly, it's all for naught.

Thanks again to NHLUniforms.com for the image direction.
Posted by ScottyWazz at 9:15 AM