Is Making It Enough?? 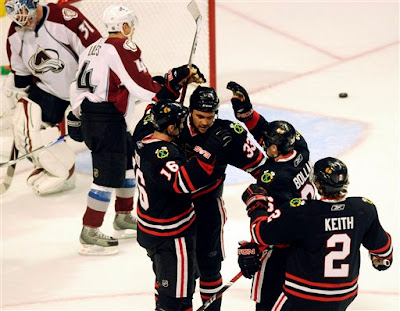 With the Blackhawks reaching the playoffs for the first time in seven years and the Columbus Blue Jackets on the verge of making their first playoffs ever, and the St. Louis Blues making a magical run to the playoffs; it makes you wonder if making the second-season is enough for teams of that ilk. Does the small victory of actually getting to the dance enough or does success in the dance make the entire season??

For the Blackhawks, their rise from rags to riches is one of legends and goes to show that there's always a silver lining to dark clouds. With the success thus far, the team will be looked at to do some kind of damage in the playoffs. Yet, should big things be expected out of them?? This is a team full of great young talent, but to expect a lot out of them in an unknown territory may be a bit of a reach. Granted, what they don't know about the second-season may make them dangerous because they have nothing to lose due to the fact they weren't supposed to be there in the first place.

The same could be said about the Jackets, as they were not meant to do much of anything. Thanks to the play of Steve Mason and the maturity of the team on the fly, here's a team who could be looked at as a dangerous dark horse. Rick Nash will have plenty of weigh on his shoulders to carry the team offensively, but they have made big strides in the short time they've had to adjust into a playoff contender. Should the Blues make it, they are another team who is young and don't know any better, which could prove them to be a dangerous team. But the love for TJ Oshie and the rest of the Blues could prove to make them the loveable dark horse in the playoffs, if they get there.

But, does the success falter for these teams if they pull an Atlanta Thrashers and get swept out of the playoffs?? Would all of this success making the dance be in vein can they not get out of the first round?? I don't think it's true, especially in the case of the Blues or the Jackets, but more will be looked at for the Hawks to succeed if they can get the home ice advantage seed.

Alone these stories are successful for showing how building from within can change a team in a short amount of time. The sign of youth ruling over experience is something that has been taking shape in the past few years of the playoffs with the success of previous teams who were led by youth. If they don't win a series, but don't get blown out, shouldn't give these teams any less merit for making the playoffs, since many of these teams were not giving the afterthought of making the playoffs this season.

There has been a changing of the guard in the way the game has been played since the lockout, so why not a changing of the guard in terms of who dominates the playoffs. Once, where veteran leadership and being there before could be worth it's weight in gold, it may seem now that the teams that are the most dangerous are the ones with no experience whatsoever. With nothing to lose and everything to gain, you have to wonder if being the playoffs before and knowing the pressure is something of a hinderance now than it has been in the past. For the most part, stocking up on veterans could be a great choice, but now-- with the energy level the youngsters bring to the game, it may be a time to see what they can actually do when the pressures on and see if they can actually feel any pressure at all towards it.

This also shows that the Central Division is becoming the cream of the crop of the NHL. Once, a laughingstock outside of Detroit, it shows now that anyone in that division could be deadly with two teams already clinchings a spot, one team very close to clinching and the other two doing battle for the 8th spot.
Posted by ScottyWazz at 5:52 PM

I think both CBJ and CHI are led by much better management than ATL, so should the worse happen and they get swept in the 1st round, they are set up to succeed in the future. While a first-round exit would be disappointing for both clubs, at least the progress is there for those franchises to build on.