Hall Of An Idea 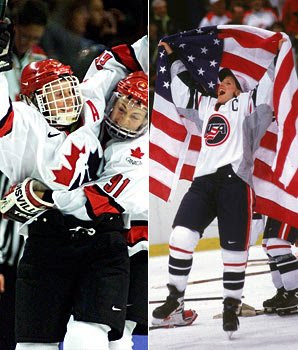 In 2010, the Hockey Hall of Fame has decided to do something that could be a couple years in the making, but they will update their bylaws in order to consider women to become part of the Hall of Fame. Currently, the by-law states that only four players to be inducted per induction ceremony. However, with the new by-law change, four men and two women will be allowed to be inducted per induction; which will open things to the women's side of the game to finally be given the honor they deserve.

I have talked about this subject before when Cammi Granato got the nod for the US HHOF, and I still believe it's beyond the time for women to be inducted. The women's game, especially in the last decade, has taken off and the time is right for the HHOF to actually start up the bands for the pioneers of the modern game and those who have broken the barrier in years past to allow the pioneers to excel as they have.

However, the main concern I have is that after you get Granato, Hayley Wickenheiser, and a couple others who have excelled, there could be a stall in the voting that the by-law could be changed once again, which could screw the pooch for this whole ordeal. This could be a whole thing where the Hall knows it's time to induct women, but they don't want some to take the spot of a male player for one reason or another. Maybe once they get all the top names out there and appease the masses, they'll change it back to normal. That's the eternal pessimist in me, so pay me no mind.

The ol' boys club seems to be seeing the light on the issues that have changed hockey for the better for all involved. Now, if only they could get Dino Ciccarelli in the Hall and things would be on the up and up.
Posted by ScottyWazz at 9:15 PM