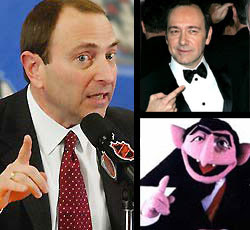 Under cloak of secrecy, the NHL Commissioner, Gary "Love Child of Kevin Spacey and The Count" Bettman, went to Phoenix in order to tell the fans of the Coyotes, "Hey, you three-- don't worry, we won't move the team." Much to the confusion of the people he was talking to, as it turned out they were just vendors learning their section for the night's game. The commish said that there may be new ownership coming, but the NHL is going to keep the team in Phoenix until it commits financial suicide by signing every member of the the 1991 Winnipeg Jets team.

In light of recent events, I don't think that the area of Glendale minds if the Coyotes die a death, considering they rejected a notion of using tax money to help out the Yotes in their dire need. If the people don't want you there-- maybe it's something to give you das boot-- if you will.

This is the thing with Arizona and some of the "non-hardcore" sports cities, especially like Phoenix-- they are very particular about winners and if there's a team that doesn't win or create a buzz-- they are ignored and pushed aside. Look at the Suns-- they were craptastic for so long, but recently; they have been on the downturn of things and could be moved to the horizon. The Cardinals were a damn afterthought until their Super Bowl run last season, while the D-backs are in the love-hate relationship with their city. So, for the Coyotes who have been irrelevant for close to a decade now and then they go to the taxpayers for help....not the best way to go about it. Win, then they'll probably be more willing to keep you.

And let's be honest here, the fact that there's still a team in Phoenix playing in front of people who may or may not be rooting for the team and may or may not care-- that's not enough to make this team stop hemmoraging money like they're a sailor on shore leave. Mixed metaphors aside, maybe it's time to get rid of major league hockey in Arizona and leave it to the minor leagues to control that industry. It was a decent experiment, it was something that was fun while it lasted, but it's time for it to be done with and move it to a city that is a little more deserving of it.

Especially in the financial climate that the world is in, every little bit will help. Moving a team to a city or demographic that will actually be willing to put revenue into the team, it would help the financial stability of the team and will help the financial stability of the league-- increasing the revenue and thus increasing the cap. If the NHLPA were to have a strong voice in this, they should be pushing for the team to be uprooted if that's the only way to sell the team. That way, the players are getting more bang for their buck and more income that could come into their lives.

It could be time to turn the lights out on the Coyotes. Albeit, the reality of them move is not going to happen because of the fact of the absurd lease they have to deal with and breaking it would pretty much put anyone trying to buy the team to move it out of the picture, which very much limits the options you have in who buys the team. The league and team pretty much have to find someone who is in the area, who believes in the area, and thinks they can grow the team and tournequette the situation when it comes to money.

And if you can do that, you may want to sell that ocean-front property that's right next to the arena.
Posted by ScottyWazz at 9:58 AM