Number One With A Bullet 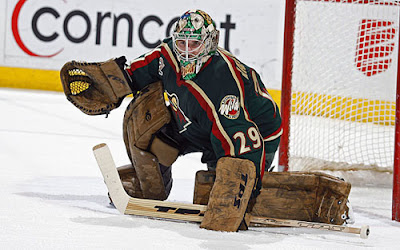 Brian Duff of The Hockey News posted a blog about searching for a #1 goalie at an affordable price. The subject he brings up is Josh Harding, who will be a RFA come summer time and could have some teams flocking over him who may need some goaltending help, with the Colorado Avalanche being the example he put out there. Duff says that Harding's camp shouldn't be in a hurry to re-up in Minny and see what comes along.

There's a couple things working against Harding. First off, he's a RFA, which means that any offer sheet he signs to, the Wild could match. The teams have to be careful they don't get into a Dustin Penner situation and wildly overbid for him just to see him not pan out as a #1 money keeper. The second thing against him is the fact there are not many teams looking for a starter right now, with the exception of Colorado. You could throw Edmonton on that list depending on how well Jeff Drouin-Deslauiers pans out, as well as Detroit seeing how much longer they can deal with Chris Osgood and how much faith they still have in Jimmy Howard, plus seeing if Ty Conklin will come back. Outside of those squads, everyone is sured up on their goaltending.

With the mention of Ty Conklin, that's another problem for Harding, the amount of goalies who would be on the open market that other teams would go for in order to not risk losing draft picks in compensation. With the likes of Manny Fernandez, Martin Biron, Antero Niittymaki, Scott Clemmensen, Mathieu Garon, Brian Boucher, amongst others on the market-- they have proven they can be a better #1 option than Harding, be a tad more affordable, and not have teams lose a draft pick or picks when it comes to signing a RFA.

To disagree with Duff, if I were Harding, I'd re-up with Minnesota for maybe one or two years, nothing too long. It may not be the most glamorous position as back-up to Niklas Backstrom, but you never know when a situation could come about where Backstrom slumps hard or goes down to injury and Harding jumps in there to save the day and maybe give him more leverage the next time around in discussions. And if it doesn't work out-- wait until he's able to hit the open market in order for him to be more enticing to pick him up, because with that RFA tag on him and so many veteran goalies with starter backgrounds hitting the open market, they'd be the first choice overtop of an unproven RFA back-up.
Posted by ScottyWazz at 3:27 PM