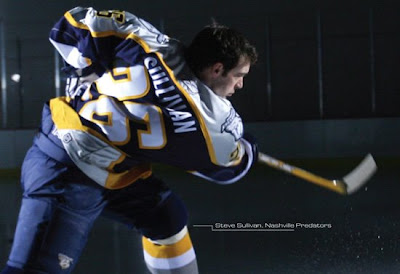 The second half of the season always brings about drama, always brings about surprises, and players stepping up. Most of the time, it's a rookie who was in the shadows at the start, but slowly found their way out, but the theme of this year seems to be guys who were buried in the back of the media guides, but have found their way into the limelight, if only for a split second.

First off, Jamie Lundmark, who seemed to be destined to be a career minor-leaguer after a stellar junior career; has found new life in Calgary with 15 points in 20 games thus-far and really putting up the secondary scoring for the Flames. While his first tour with the Flames organization didn't bring much of anything, it seems that the second tour is going to be a defining moment for Lundmark's career and could turn a whole lot of things around for him going into the off-season, where he is a UFA. While he may not keep up this kind of pace for the duration and even into next season, Lundmark is bolstering a line-up that is already deep in scoring threats with Jarome Iginla, Olli Jokinen, Mike Cammalleri, and Daymond Langkow.

A lot of people seem to have gotten on the St. Louis Blues bandwagon and with youngsters T.J. Oshie and David Perron leading the charge, how can you fault anyone?? Perron is leading the team in assist and has been on a tear to end March, while Oshie has been starting to showoff his highlight reel abilities with some memorable moves and fantastic goals. There's a lot of people pulling for John Davidson to succeed in the front office, and if not this year-- definitely next year will be the crowning achievement for JD.

Out East, the revitalization of Cam Ward has been a sigh of relief for Canes fans. Ward has gone 18-8-2 since the All-Star break, has won nine of his last 12 starts, and has help solidify the Hurricanes into a playoff spot, if not a run at the Southeast Division championship. For an upstart who won a Stanley Cup and start to flame out the two years after, it's a good sign to see Ward shaking off the cobwebs and getting his swagger back.

However, the most intreging second-half story has to be Steve Sullivan in Nashville. Here's a guy who was out for two years and has come back and made up for so much lost time. Many thought when he was out with a back injury that he was going to go the way of his former teammate Eric Daze and never be the same again. Yet, much to the chagrin of many, Sullivan has played like a man possessed and couldn't have come back at a better time for the Predators. Already, Sullivan has 26 points in 35 games and seems to have breathed some much needed life into the Preds playoff existence. I'll go out on a limb right now and say he's got a good shot at the Masterson Award.

We have almost two weeks left in the season and there's still plenty to be decided. There's plenty of teams who need to get someone to step up big time and really help push the team through into the playoffs, but for some it may not be enough. It should be an interesting two weeks to see who shine and who will sulk.
Posted by ScottyWazz at 7:15 PM