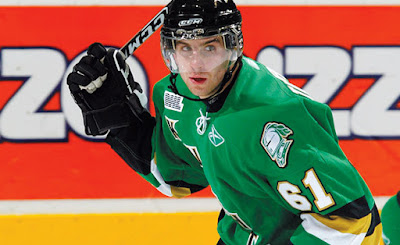 Since the trade deadline is over with, the next big acquisition day is the NHL Entry Draft, which will be held June 26th and 27th in beautiful Montreal. And while it's the norm to rank the teams as winners and losers after the deadline, I also find it to be hack. Plus, in the words of Ron Bennington, I've got my own radio show, so you can hear the opinions there.

With most of these moves, you can tell some of these teams are already looking forward to June and their place in the standings are showing that they're going to be in the big hunt for the top five picks in the Draft. So, if the season were to end today...the deadline would have been worthless and we would all feel ripped-off for it ending early. In any event, here's a look at who would be at the top of the Draft chart and who I think will be taken in the top five.

1. NY ISLANDERS: John Tavares, London Knights: While it's not what Tavares probably wanted, he will automatically become the face of the franchise and the guy who will lead this team back to its days of mediocrity. Plus, with youngsters like Kyle Okposo, Jesse Joensuu, and Blake Comeau already in the mix, it'll be the youth movement on Long Island, which may or may not bring them a new arena and new fans. Though, I wouldn't be surprised if Tavares could step in and contribute immediately, but there's also that outside thought he do something to stall his start with the team and maybe create a ruckus to get onto a better team.

2. ATLANTA THRASHERS: Victor Hedman, MoDo: Sure, the defense in Atlanta hasn't been strong since William Tecusmseh Sherman has been in power, Hedman's choice could change all of that. Not only is he NHL size and skill ready, he could very well be what turns this franchise around for the better. They already have offense in Atlanta and with the right help on defense, the goaltending could come around perfectly. Plus, with Garnet Exelby, Zach Bogosian, and Boris Valabik in the rebuilding part of the defense-- Hedman would be the fourth man to complete this perfect storm of defense.

3. TAMPA BAY LIGHTNING: Jordan Schroeder, University of Minnesota: As a Freshman, Schroeder has been amazing for the Gophers, tied for the team and WCHA lead in points with teammate Ryan Stoa. With his ability to stay in the NCAA, it could allow him to grow as a player and allow the Bolts to get their act together to accomodate Schroeder to play alongside Steve Stamkos. With is great hands and solid passing ability, Schroeder should be the set-up man for the future in Tampa.

4. OTTAWA SENATORS: Evander Kane, Vancouver Giants: Kane is what the Senators are looking for in a player. A solid center with scoring abilities who is coming into his own. While he may need more seasoning with the Giants, what better team to get it done with than one of the best in the junior hockey. Once Kane is ready, he could be the secondary scoring punch they look for or he could very well be a part of the primary scoring in the Sens system.

5. COLORADO AVALANCHE: Jared Cowen, Spokane Chiefs: While his season is done with a knee injury, the Avalanche will look towards Cowen as their future on the blue line. With the size and strength, as well as hockey IQ; Cowen is going to be a stallwart on the blue line for some time in Colorado, or any other team he could go to. With Kevin Shattenkirk waiting in the wings as well, it could be a dominant one-two punch that the Avalanche hasn't seen in a while.

So, that's the top-five as I see it right now, mock wise. One thing is true though, we won't see a goaltender go until maybe the late-second, early third rounds. It goes along with the ebbs and flow of the hockey world where now the skaters and scorers are the top dogs in the prospect pile, while goaltenders are floundering and waiting for another upswing of talent.
Posted by ScottyWazz at 3:50 PM