A Case For Cammi 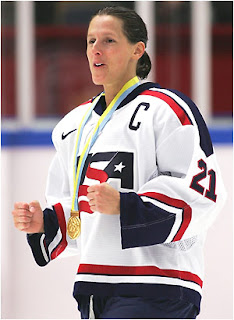 There will be plenty of people who will debate what that Haley Wickenheiser should get the first nod over Granato for what she has done with her status and getting into professional ranks, but either or at this point-- it's high time that a figure in women's hockey needs to be enshrined into the HHOF, especially with the expansion of women's hockey all over the world.

Granato should recieve the nod first, mostly since her contribution to women's hockey in the US has gone above and beyond what anyone could imagine. Granato was the captain of the Gold Medal winning USA team in the 1998 Nagano Olympics, which was the first time women's hockey was in the Olympics and really has been the figure-head for women's hockey in the US. Also, for what it's worth-- Cammi had 139 goals and 256 points in 99 career college hockey games; both of which are records for Providence College. Sure, it was in the infancy of women's college hockey-- but even still; that's damn impressive.

You have to remember, the HHOF is for all forms of hockey-- which seems to be forgotten. There have been plenty of international stars, male and female, who have been overlooked for enshrinement. I know on the June 25th edition of Face Off Hockey Show, Lyle Richardson of Spector's Hockey talked to us about how overdue it has been for a women to be inducted.

With all these accolades being given to Granato in the past few months, it's about time that the Hockey Hall of Fame selection committee give a serious look at Granato being the first female to be inducted. Granato is one of the most recognizable faces when it comes to women's hockey and it would be a fitting honor for her to be the first women to be inducted into the HHOF after the US HHOF and IIHF HHOF.
Posted by ScottyWazz at 8:18 AM