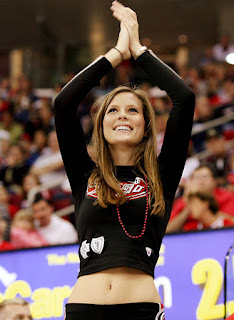 So, Greg Wyshynski has started a wild-fire in the blogosphere with his "Five Changes" series on his Puck Daddy Blog. I mean, the likes of Matt Bradley, Lil' Jimmy Mirtle, and Ross McKeon; who drew the ire of Washington Caps' owner Ted "Teddy Ballgame" Leonsis.

Now, since I'm not too prominent, except in my own mind-- I'll steal this time and writer's block to air out my ideas and what needs to be done to change the NHL.

1. Get rid of the nets: As tragic as the Brittany Cecil incident was, I think enough time has passed that we can get rid of the nets and give the fans better sight lines to the game. It's one of the things that is a risk of going to a hockey game, but they announce it all the time during the game and have signs posted in the arena; read and listen, folks.

2. One ref is enough: There's two refs out there and we still have to go to instant replay for goal calls and possible suspensions. If they're still going to technology to get things right, why have the extra clutter on the ice?? If this is going to be a game of speed and skill, one less person on the ice will allow players to be more free flowing and give that extra space they need in order to dangle.

3. Move Columbus to the East: With the except of Detroit, the Jackets are the only team in the West that plays in the Eastern Time Zone. Now there's a couple reason the Jackets would move East over the Wings. First, the Wings have plenty of rivalries out in the West to leave behind, while the Jackets don't really have any. Second, the Jackets are another young team that's coming up the ranks and could flourish in the wide-open East. It would give the Jackets a chance to make the playoffs and actually make for even more exciting hockey out East with all the talent there. Now, not to make the Conferences unbalanced....

4. Relocate the Panthers: Sorry Panthers fan, but you aren't cutting it. Albeit, Miami is a fickle sports town-- just ask the Marlins and Heat, even after they won championships. In light of the short-comings of the franchise, maybe it's time for the current ownership to put the Panthers up for sale and maybe get some investors for Kansas City to buy the team and put it in that vacant arena they build "Field of Dreams" style. And let's not kid anyone, the actual Florida panther is almost extinct, may as well have the team of its namesake go by the wayside, too.

5. Ice Girls for ALL: Who doesn't like decent looking women in tight clothing in an ice rink to help pep things up. Sure, there's people who hate them and say they ruin the tradition of the game...but they also said that hockey below the Mason-Dixon line wouldn't work; though the jury is still out on that one in some cases (see #4). But in the end, some fans in some buildings need a little motivation to cheer along. Enough with the lethargic fans out there. For more ice girls, check out Hotties of Hockey-- good times, good times.

So, that's that. It's a now hack-move just going with the trend of others and coat-tailing their noterity, but it's how I roll.

Oh, and by the way-- if anyone knows the name of the Hurricanes Storm Squad girl in the picture, let me know.
Posted by ScottyWazz at 11:22 AM

Great minds think alike....minds that think like mine should see a psychologist, I'm sure.