Intent on Writing About Intent on Stopping the Play 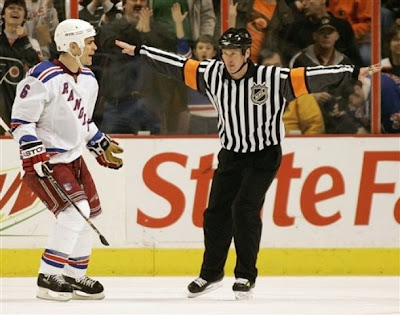 The buzz phrase for the 2009 Playoffs, aside from "Scrums after the whistle", may be "Intent to blow the whistle." That's a phrase I've heard way too much in the past week and two days since the playoffs have started. Apparently, this is a way to get the refs out of some hot water if they can't find the puck and it goes in the net.

Quite frankly, this could be the silliest rule out there to date. I mean, if you intent to blow the whistle, if you intent to stop the play....you have a whistle, you have fluid motion in your elbow to move your arm from your side to your mouth-- blow the effin' whistle, it's not that hard.

Maybe it's me being a little bit antsy when it comes to dealing with the drama of playoff hockey, as it is. Maybe it's the fact that this is an instant scape clause for the refs and that's a BS way to go about things, but they do it anyway. Maybe it was Memphis, maybe it was southern summer nights.....but enough Pam Tillis. The fact remains that this is something that should be looked at over the summer when it comes to rule changes.

To be honest, I can see that it's effective only in terms of guys hacking at a goalie who has it covered for a few second prior, but in terms of reviewing a goal and maybe making or breaking a team who could have a chance to tie it up or put themselves ahead, it's a craptastic rule to have on the books. This rule has a chance of being like the puck over the glass in terms that it could turn the game on it's end and could cost a team dearly when all is said and done. I hope that it never has to get to that point, but you can almost imagine that it will take an incident and uproar for the NHL to actually give it some thought. Hell, we almost had that in Game Four of the St. Louis/Vancouver series, so that should be enough to bring it to the forefront.

I'm just tired of hearing it as an excuse for refs, especially when it comes to reviewing plays that could have a meaningful connotation to it all. I mean, I definitely intend to hooking up with all the girls I flirt with, but sadly it never happens that way. If the ref intends to call a play dead, then they should do it or deal with the consequences when he didn't.
Posted by ScottyWazz at 10:00 PM