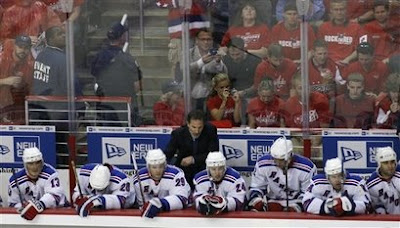 While they did collapse after taking a 3-1 series lead-- the New York Rangers did a lot more in the playoffs than many gave them credit for. However, their lack of offensive boost was ultimately what got them in trouble and what made them miss the second round of the playoffs.

The Rangers were tied with the Lightning for 2nd to last in goals for in the regular season, with the Islanders coming in last. Only four teams as a whole had less goals than the Rangers, which should be a huge cause of concern for the Rangers heading into the off-season. There's plenty of RFA to sign, including Nik Zherdev, Brandon Dubinsky, Ryan Callahan, with Nik Antropov being a UFA. Whether or not any will be signed is to be seen, though Dubinsky and Callahan may be a lock, the Niks, not so much. They could use the room in order to get someone more offensive minded in there.

Defensively, the Rangers need to be a lot better. Only Paul Mara finished the season on the plus side of the plus/minus docut, which shows you how awful all the others played, including the newest acquisition of last summer, Wade Redden-- or as the kids call him-- the albotross. And while Redden and Michal Rozsival provided some offensive spark, nothing is getting done in their own end, which is a killer to the team and leaves their goalie hung out to dry more often than not. Marc Staal still needs some seasoning about him, but he looks to be the shutdown guy for the Rangers, even at his young age.

Granted, this will be the first off-season with John Tortorella as the head coach and it should be interesting which changes he would want to fine-tune in order to get the team that he wants and not just one he inherits. Also to see what he would want for his team in terms of system. Obviously, he'd love to see more scoring and would love to see his goalie get some help, but whether or not it's in the budget or not will be a different story.

The Rangers had a roller-coaster ride of the a season-- going from great to crap to mediorce to get into the playoffs. Then in the playoffs, take a commanding lead in the series, but only to collapse due to their Achillies' heel of lack of offense and porous defense. There's going to be a lot of "what could have been" reminising in the New York media, but you wonder if they should be happy to have gotten there at all.
Posted by ScottyWazz at 8:30 PM