The West was the best for me, going a perfect four for four in the first round with an exacta in Chicago and THE upset special in Anaheim. I can only hope the second round for me in the west will be just as prosperous. 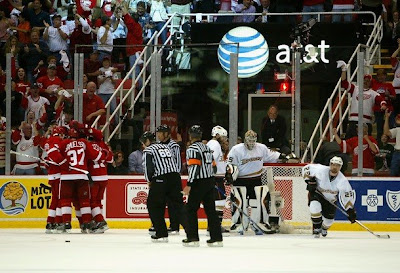 The Red Wings made short work of the playoff virgins in Columbus, but they did have a scare in Game Four. The old Chris Osgood showed up to the rink and it makes you wonder if that will be the goalie who shows up for the rest of the playoffs. Luckily, Johan Franzen is back in second season scoring form, while Dan Cleary has been the unlikely second banana on the Wings. We have yet to see the best out of Henrik Zetterberg and Pavel Datsyuk, but many hope it comes soon before it's too late.

After a huge upset, the Ducks are going to be flying high-- to do a little wordplay here. Jonas Hiller has stolen the top-slot in net from J-S Giguere and played the big dog role for the Ducks, keeping them in the game. Chris Pronger has been defensively sound and kept his elbows down as Ryan Getzlaf has been the offensively leader, while mixing it up a bit here and there. With the upset boosting their confidence, you can only imagine what the Ducks could do as an 8-seed.

PREDICITION: This will all be dependent on what Chris Osgood shows up, but I think the lack of slip ups against a hungry team in three of the four games, the Red Wings will have the edge in this. While Hiller has been good, he hasn't had to face someone like Tomas Holmstrom to annoy him in front of the net. Wings in six. 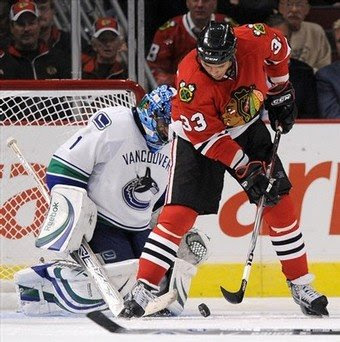 There's a reason why Roberto Luongo is the captain of the Canucks and his numbers are speaking for themselves. Luongo has been nothing less than spectacular, which has help with the defensive minded Canucks. While the Sedins have played well and been the offensive catalyst; more depth will be needed in order to go further in these playoffs and in order to be a success. There's only so much Luongo can do to keep the Canucks in it.

After seven years, the Hawks came back into the playoffs with a vengence against the Flames. The Hawks youth were able to show their aggression and never-give-up mantra in order to overcome some deficits and to have the killer instinct to not take a lead for granted that has happened to others in this playoffs. What was really shocking is role guys like Kris Versteeg, Cam Barker, and Brent Seabrook putting up the big points they have been.

PREDICTION: While the Canucks are the last Canadian team in it, you can't go against the energy of the Hawks this playoffs. These kids have something to prove and could make it 2-for-2 when it comes to beating Canadian teams, but it goes the distance. Hawks in seven.
Posted by ScottyWazz at 11:50 AM