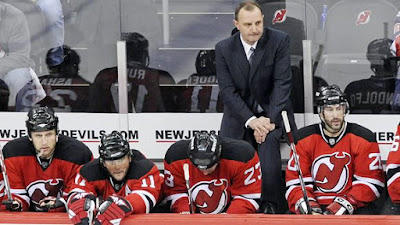 A season of surprises, including the last minute of Game Seven, have come for the Devils this season and now the questions begin on what could have been and what they could have done in order to still be in the playoffs.

First, the Devils learned they can win without Martin Brodeur in net, which should be fantastic to know since the Devils may want to see if they can get their superstar some rest from time to time. However, the question here is if Scott Clemmensen will price himself out of the back-up job because of how well he played this season. He could command a serious contract out on the open market if he went out there, but he would have the comfort of not having all the pressure and expectation on him if he stays with New Jersey. Decisions, decisions.

In Brodeur's absence, the offense was allow to jump to the forefront. Zach Parise made a big name for himself with a 45 goal campaign and 94 points on the season to lead the team in both. Patrik Elias was able to become a factor again for the offensive, while Jamie Langenbrunner and Travis Zajac were chipping in here and there. With Brodeur back full-time next season, it will be interesting to see if the offense will go back into a defensive shell or if they will allow to go all out like this past season. It'll be interesting to see what the Devils do with the contracts of John Madden, Brendan Shanahan, and Brian Gionta, as they are all UFAs this summer.

The defense hasn't been as strong as it has from the Devils' past, but the consistency from Johnny Oduya, Paul Martin, and Mike Mottau, all whom were over +20 this season, has given the Devils a good core of lunch-pail defenseman who won't be overly flashy, but will get the job done. Colin White was anchored the defense and had a solid season overall. Expect Oduya to get a nice contract re-up this summer and have him learn more for White and Martin to be the leader of the defense for years to come.

While all the positives are from the regular season, something couldn't click with the playoffs, often coming down to late game collapses. Concentration will be something that will be worked on for the summer and playing all sixty minutes will be crucial to the success of the Devils going forward. With all the talent they possess, they could have done a lot more and gone a lot further than they did. If they want to be a Cup contender every year, they need to finally get past the first round-- which they haven't done for two post seasons.
Posted by ScottyWazz at 8:50 PM