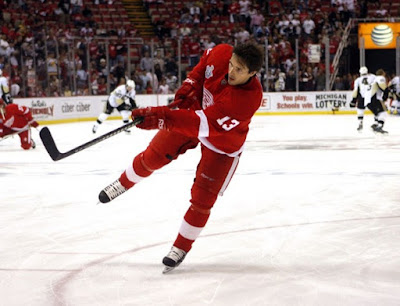 Another award was announced to end out the week and it couldn't have been a WORSE award to announce heading into a weekend, the Lady Byng for most gentlemanly player in the league. This is what we have to linger over for the weekend.

I'm sure it was a distinguished award when it was introduced, but as time and time went on, it got less and less relevant. Sean Leahy tweeted me the best thing, who want to be known as the most gentlemanly now?? It's basically who has the most playing time with the least amount of penalty minutes.

So, instead of breaking it down, instead of boring you-- I'm going to hit the MP3 Player and give you a 15-song playlist that comes on, because that could be more entertaining than dissecting the Lady Byng.

Oh, and I think that it'll be the fourth straight award for Pavel Datsyuk based on his point output and 22 PIMs. Though Martin St. Louis' 14 PIMs may make a run, but who cares-- really??
Posted by ScottyWazz at 11:00 AM