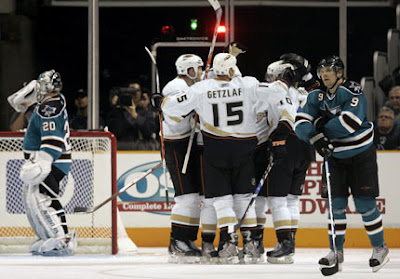 While two games does not a series make, you have to wonder what the mindset will be with these teams who are winless in their playoffs situations. While the Blues could be counted out since they are down 3-0, is there hope for other teams who are down 0-2.

The biggest question mark could be with the San Jose Sharks. Albeit, I picked that upset special in my predictions; I didn't expect it to be this outright. While Jonas Hiller has been nothing less than spectacular for the Ducks, the lack of urgency from the Sharks is very disturbing. Plus, it looks like the tag of playoff-choker will never be off Joe Thornton if he can't take charge and lead the Sharks to victory. Not just on Thornton, guys like Patrick Marleau, Devin Setoguchi, and the rest of the supporting cast haven't been seen and we may want to put an APB out on them. If the Sharks bow out of the first round of the playoffs after winning the President's Trophy-- things will change, all around, I'm sure.

Of the teams down 0-2, many people think the Flames will bust out of their slump when they return home. The thing with the Flames is that they played fine the first 20-30 minutes of the game, but then just seemed to lose all steam and motivation. While the "C of Red" will be a motivating factor, finding a way to have a healthy defense and having Miikka Kiprusoff handle rebounds much better than he has been will be the determining factor if the Flames can bounce back and head back to Chicago.

I don't think many people thought that the Rangers would be this tough on the Capitals, but believe it. Henrik Lundqvist is back and that could be scary for not just the Caps, but the Eastern Conference. Yet, the shot-blocking from the Rangers has been stellar and Alex Ovechkin has been doing way too much in order to get his team the W. If he can allow guys like Alex Semin and Niklas Backstrom do their thing, he'd be better off and may take control of the series by playing it low-key. Mike Green really needs to step up his game a little more on both sides of the puck, while Simeon Varlamov may have to take the reigns from here on out.

The Canadiens and Blue Jackets are in deep. First, the Habs are just getting outclassed by the Bruins and their frustration is showing on the ice. All the scrums happening, it's getting into the heads of the Canadiens and has thrown them off their game. Even Saku Koivu is getting shaken up by it. Don't expect to see Carey Price the rest of the season, unless Jaroslav Halak gets injured or doesn't want to feel like a German prostitute anymore. Unless the Habs can focus on their own game, they'll be done soon.

The Jackets are being taught a valuable lesson by the champion Red Wings and Steve Mason is looking like the rookie he actually is. Sure, this is the first playoff for most of the Jackets' stars, but you'd think that they would keep it a bit closer in terms of score and competitiveness. The one thing out of this series though is that Chris Osgood may have gotten his swagger back. If they go far and it's because of Osgood, the Jackets can say they gave him that confidence back to hoist another Cup.

It's not beyond the realm of possibilites for these teams to comeback down 0-2, but with only about a 28% chance of them coming back, the odds are definitely not in their favor at all.
Posted by ScottyWazz at 9:00 AM