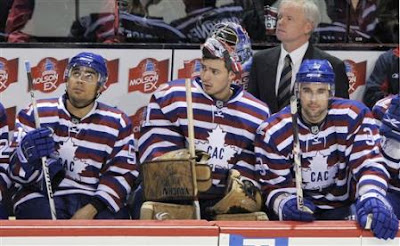 A season filled with so much promise in their centennial year, the pomp and circumstance that had come with it turned into utter disarray and thoughts of what's going to happen in the off-season to get the glory they were supposed to get this year. There's several more questions regarding the Montreal Canadiens off the ice, but the on-ice product will deal with most of the scrutiny until something otherwise happens.

Where did it all go wrong?? Did the injuries get the better of them?? Was the early lead in the standings only fuel to cockiness for the Habs players and made them lose sight of the prime objective?? Was there too much fun to be had for some of the youngsters on the roster?? Whatever it was, the collapse will bring about questions for the summer months ahead and make those wonder what can be done in order to right this historical ship.

Obviously, what will happen in net is going to be a hot topic. Jaroslav Halak came on as a great fill-in for the oft-injury/sick Carey Price, but neither of them filled out and finalized the job. Which one will be the starter remains to be seen, but if Price is getting the job, he'll have to refocus on the task at hand; which seem to elude him this season. It's all going to start from net out and both of them will have to be solid in order to give this team any hope.

A number of UFAs upfront will be questioned whether or not they'll be brought back, including Alex Tanguay and Saku Koivu, with the latter more likely to come back than the former. Tanguay will be depended on if he wants to stay with the club and if he thinks he'll get anything better from anywhere else. One thing is that Alex Kovalev won't be back for the Habs, as his major inconsistency was a downfall of the offensive production and made him fall out of grace with the team's brass and the fans, although they gave him much love at the All-Star Game. Another non-forward UFA, Mike Komisarek, should be back for the Habs next season to help anchor the defensive side of the puck.

What will happen with the ownership is another burning question for the off-season. Whether or not George Gillett will sell and who will buy it is going to be debated back and forth, up and down. Many fans and pundits alike believe that as long as the team is kept competitive and marketable, it doesn't matter who is in charge, even Celine Dion. Mostly because with Dion, her Habs will go on. The fans will want the team to stay to its traditions regardless of who is going to be in charge and regardless of what is done with the team. So long as they are in the Cup hunt year after year, the fans will be appeased.

The answer to the ownership question will be the answer to coaching/GM question that will face Bob Gainey if a new regime is put in place, and may be a question even if there is no new ownership. While Gainey may not get the guff he deserves, the fact remains he built this team and didn't address the problems when they first started to go downhill. It's obvious that there will be a coaching change, but whether or not it'll be Gainey's decision to appoint the new coach or not will be up in the air for the foreseeable future.

The 101st year doesn't have the same mojo at the 100th year, but that's the breaks. The hype that came into the season didn't follow through after a quick start and the mapping of parade routes in November. Add all the off-ice debacles with night clubs, mafia connections, and coaching disputes-- it was a recipie for disaster in the second half of the season, coupled with the on-ice troubles due to injury, poor communication, and a lack of focus. Maybe instead of barberpole jersey, they'll have dalmation spots and bring more kids into the fold.
Posted by ScottyWazz at 8:10 PM