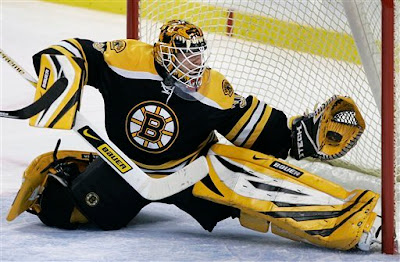 One of the more highly anticipated awards at the NHL Awards is the Vezina for the best goalie in the league, for which the nominees were announced today. They are Minnesota's Niklas Backstrom, Columbus' Steve Mason, and Boston's Tim Thomas.

People know about Mason and his year, and while his numbers as a rookie are beyond remarkable-- this year won't be his year; but he should be back again in this list for years to come. Nik Backstrom was a silent candidate, but his numbers put him in the top-5 in save percentage and goals-against average. However, both of those guys will only be seen on screen for these awards, because this one is going to go to Timmy Thomas.

Thomas was more than stellar this season, topping the charts for goals against average and save percentage. While his wins weren't in the top five, his team was the tops in the Eastern Conference and he was a vital part of their success. Plus, the story of a guy who was stuck in the minor leagues, then trekking through Europe, finally landing a job in the NHL is one that will make people talk for years to come.

If Thomas doesn't win this Vezina, I'll quit using dial-up; I swear to you, I'll go back to telegraphing this thing or I'll bring back the pony express to deliver my writings to all 10 of you.
Posted by ScottyWazz at 10:10 AM