Eastbound and Down: Round Two

So, after the first round, I'm licking my wounds for the from the predictions. I only went one out of four in the East, but the one was an exacta with Washington in seven. But, it's a clean slate and now we look at what's going to happen in the East and who could march into the Conference finals. 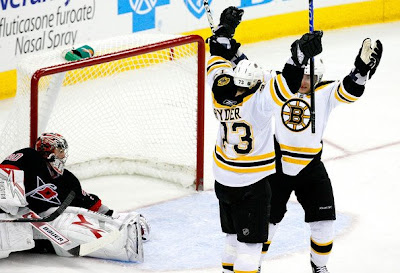 The Bruins made easy work of the Montreal Canadiens and seem to be the dominant force in the East with the ease they were able to take out the Habs. Tim Thomas was solid in net and continued on his stellar play from the regular season. The question now is will there be a lot of rust on the Bruins with a week-plus layoff between games. While the rest will be much appreciated, it could catch the Bs off-guard on a team like the Canes who are in fresher game-shape and hungrier to prove themselves off the hop.

The Hurricanes had a shocking Game Seven win over the Devils and seem to have a swagger that is reminisent of that in 2006 when they won the Stanley Cup. The Canes' best players have showed up to play, with Eric Staal coming through in the clutch and Cam Ward playing solidly when called upon. With the role players like Tim Gleason and Jussi Jokinen coming up big in key times, the Canes are wiley team that could be very underestimated through these playoffs.

PREDICITION: As gritty and tough as the Canes were against the Devils, the Bruins will probably be too much for them. The Bruins have all the things going for them and have been getting energy from the whole roster, top to bottom. As much as the Canes will scratch and claw to get ahead, it will do little to advance-- but I think they will steal a game at home. Bruins in five. 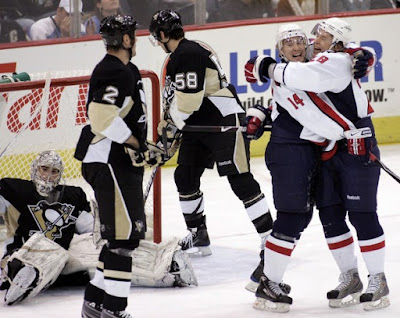 This is the match-up the NHL has been waiting for. This is the main event in the second round and will prove if the NHL is able to market their product with the two biggest names in the NHL and if they can't-- the whole marketing department of the NHL needs to be fired and ship to some remote island to die.

Anyway, the Capitals are coming off a tough series against the Rangers, which they weren't able to display their offense because of the stingy Rangers defensive play and goaltending. However, when they were able to find the niche for the net, they came in droves and showed why they should have dominated the series. Coupled with the emergence of Simeon Varlamov-- the Caps have a new life in the second round.

The Penguins had a great series against the Flyers, where they were able to comeback from some deficits during the series. However, the vaunted offense hasn't been as coming up big as many had thought it would. Averaging only three goals a game, the big play from M-A Fleury has been the helping factor for the lack of high-paced offense that the Penguins had hoped for in the playoff situation.

PREDICITION: The Capitals will go up three game to one like they always do the the Penguins. The Penguins will win Game Five....and the Caps will close it out in Pittsburgh. So long as the Caps can stay out of the penalty box and shut down the top line, they should do just fine against their rivals. Caps in six.
Posted by ScottyWazz at 11:05 AM

and the Caps have averaged 2.71 goals over 7 games...isn't that worse?

That's true, but you have to take into effect the Caps played against a team who let up 2.68 goals over 82 games, so they were better than average. Small victories for the Caps, who put up 11 goals in the last three games of the series.