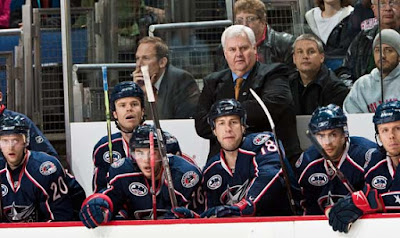 It has been quite the year for the Blue Jackets. It started with tragedy as founder and owner John McConnell passed on, but it ended with celebration as the Jackets made their first ever playoff appearance, albeit a short one, in the franchise's history. Along the way, they found a solid goaltender and maybe have served notice to the NHL that they are not the doormat they used to be.

After being swept by the Cup champions, there's plenty to take away from the season and plenty to build on. Steve Mason's play is definitely one of the big things that the Jackets will be able to feed off of. While he didn't show it in the playoffs, the regular season play of Mason and trade of Pascal Leclaire has shown the Jackets have their franchise goaltender. No doubt, Mason should get the Calder Trophy, but he won't be the shocking figure he was this season.

Not too many free agents to worry about for the Jackets, with Manny Malhotra and Jason Williams probably going to get re-signed and Michael Peca being let go by the wayside. Though, the Jackets impending problem will probably be getting a first-line center to accompany Rick Nash to have a nice one-two combo in Columbus. Expect a play for Mike Cammalleri in the summer, if the Flames don't re-sign him.

Defensively, Jan Hedja, Fedor Tyutin, and Mike Commodore were solid this year, but were the only ones to play over 70 games on the backline, while Kris Russell and Marc Methot showed signs of improvement, but will need a little more PT before they solidly help the Jackets blue line for the long-term.

The Jackets will also have to look for help in the area of secondary scoring to help Rick Nash. Nash was the only player with more than 60 points this season, while Kristian Huselius looked to be a bust after coming from Calgary, recording 10 less points than a year ago. However, you wonder how well someone like Antoine Vermette will do next season, as he scored 13 points in 17 games with the Jackets, which may mean bigger things for him in a full-season with Columbus.

Sweep aside, it was a learning process for the Jackets and they will take a lot away from this season. Ken Hitchcock's message has been heard and translated into winning way for the Jackets, which have given the loyal fans in the C-bus something to truly cheer for. If nothing else, they can be proud of the effort put forth by everyone and should be looking forward to brighter days ahead in the Nationwide Arena.
Posted by ScottyWazz at 8:15 PM