Then There Were 44; Goodbye To Another Jet 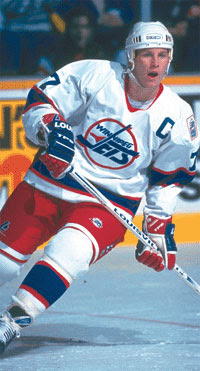 With Keith "Walt" Tkachuk retiring at the end of this season, the NHL '94 List is now down to 44 (with plenty unknown). Not only that, but Tkachuk leaving leaves only Shane Doan and Teemu Selanne left as an original Winnipeg Jets still playing in the NHL today. I don't know which is more significant in the whole ordeal.

As much as I could go on about why Keith Tkachuk is a memorable player, buddy and hockey blog czar Greg Wyshynski did all of that last night after the announcement was made.

But back to losing the Jets in their entirety, the odds of Teemu Selanne retiring are fairly high; but when Shane Doan finally decides to hang them up, does that mean the Jets are just a memory to the hockey puckheads who have actually seen them. Of course, you could also throw in Oleg Tverdovsky into this list, but he's over in Russia and already a distant memory to hockey fans across the NHL. Will anyone finally be able to let go of the Jets as they were when they left?? I'm all for teams being remembered as they once were, but to try and bring back that glory to with a relocation and bringing back the old name is something I'm not a huge fan of.

Okay, I can't say that as I'm a fan of the Ottawa Senators, but they were an expansion team who brought the team name back after almost 60 years being a dormant name.

In any case, I don't know where I'm getting at. I guess just trying to bring the Jets name back to the NHL wouldn't be the same if there are players still out there from the original team. While that may not be a problem with expansion or relocation, I'm very opposed to the Jets moniker coming back; especially with the records of the team being moved to the Phoenix Coyotes. If it was a situation like the NFL Cleveland Browns where the Jets record stayed in Winnipeg and not transfer to Phoenix, I'd be fine with the Jets name coming back. However, that's not the case and if Winnipeg got a team back; the smart thing to do is not go with the "Jets" name. Best to leave them in the past and remember the good days you had with them.

That includes the days of the last Jets' captain, Keith Tkachuk. He would be the transition part from Winnipeg to Phoenix, then passing it to Shane Doan who still carries the pride of that franchise to this day. I'm sure they'd like to be able to remember their Winnipeg days, but who knows their take on the return of another Winnipeg Jets incarnation. Only time will tell.

EDIT: Little did I remember Kris Draper and Nikolai Khabibulin. Thanks to TSN for reminding me.
Posted by ScottyWazz at 2:20 PM

It's there in the edit, Rob. I don't know why I forget him as a Jet/Coyote.