Stage Set for the Sevens 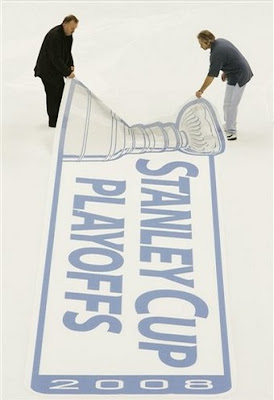 This is the gist of what the coaches speeches should be to the four teams going into the Game Sevens of the first round. Starting tonight, it's going to be a make or break time for these teams, especially those who are at home and how Game Six's outcome was. The mindset couldn't be any more focused and the questions are going to be abound, for sure.

You have to wonder what kind of momentum each side has. Especially since the situations in each side are a bit different. For the Coyotes/Wing series, the series has been very tight and each team holding a lead at some point of the series. The Coyotes are back at home and will have the support and momentum after winning Game Six. The Red Wings couldn't finish it out at home and now have to deal with the Coyotes, who have been somewhat decent at home, even though they've lost two games already on the road. It's going to be whether or not the Wings offense can show up and if Jimmy Howard can come up big in the biggest game of his life to this point. The Coyotes are going to have to show up big, with or without Shane Doan-- as he is a game-time decision. It should be an even more tense game than any other games in this series.

The Caps/Habs series should have a different vibe to it. The Caps had control of this series, up 3-1 in the series, and then got stoned by the returning Jaroslav Halak, only getting two goals on 92 shots against. Even though the Caps are back at home, you have to wonder if the history of series past are going to haunt them. They need to be better than their 1-for-30 power play and actually find holes in Halak rather than thinking he's invincible, because they did run him before. The Habs have to keep the pressure up. But at the same time, they've been in the elimination side of it twice already; just have to wonder if they can keep up the desperate play and actually think they're down still. The Habs came out strong in the first ten minutes of Game Five and Six, which really set the tone for the rest of the game; both of which they won.

It's the most exciting thing in any sporting event and also a game fans love and hate. They love the fact they can actually have maybe one more game, but hate the fact it could be the last of the season. There are no more shades of gray, just black and white. You win, you move on-- you lose, you're cleaning out your locker room the next day. Tension is high, cliches are even higher, and I have nothing more to say about that-- enjoy the games.
Posted by ScottyWazz at 9:00 AM