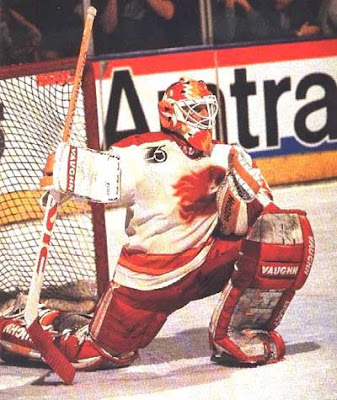 From the word go, this goalie was the perennial third-stringer due to teams being completely stacked from top to bottom on their depth charts for netminders. However, his time from the bench and press box allowed him to garner enough knowledge about the game and its angles that he took the usual path into coaching after his career was finished. This week, we tell the tale of Jeff Reese.

When he was growing up, Reese started for the Hamilton Kitty B's in midget hockey and showed himself off well enough to get picked up by the London Knight in the OHL for the start of the 1983-84 season. The Knights trusted Reese so much, they threw him right into the starting role and Reese adjusted well enough to salvage a 18-19-1 record in 43 games. The Knights rode Reese into the playoffs but lost in the second round.Reese was seen as a "work in progress" for his draft year, as he was selected 67th overall in the 1984 Draft by the Toronto Maple Leafs. Reese learned enough from that previous year to take into the 1984-85 season where his record improved to 31-15-1 with a 3.88 GAA. Though in the playoffs, Reese couldn't get the Knights past the quaters thanks to the messed up scoring system the OHL had. Reese went 5-2-0, but still wasn't enough. His last year in junior for the 1985-86 season was less than memorable as in 57 games, Reese went 25-26-3, even with a decent 3.93 GAA. It would be Reese's last year for the Knights.

With the start of the 1986-87 season, Reese moved onto the AHL with the Newmarket Saints, the affiliate of the Maple Leafs. Reese didn't get much of a break, as he was thrown into the starting role quick playing 50 games and getting a 17-29-2 record for his troubles. There started to be quick a logjam in ever aspect of the Leafs goaltending, but Reese did start his season on top in Newmarket for the 1987-88 season, with a brief call-up in the middle of the year to Toronto. With the Saints, Reese saw his time dwindle after his call-up; splitting with Tim Bernhardt and Jim Ralph; Reese compiled a 10-14-3 record with the Saints and 1-2-1 record for the Leafs in his five games. One last split year that focused on Reese's AHL development in the 1988-89 season, with 37 games in Newmarket (17-14-3) and 10 games in Toronto (2-6-1).

Reese would finally move up to the Leafs as a third wheel in the 1989-90 season behind Allan Bester and Mark LaForest, but injuries would rear it's ugly head, as Reese dealt with injuries to his knee-cap; breaking it in the first month of the season which saw him sidelined until December. Reese would come back to play for Newmarket for seven games at a 3-2-2 record before moving up to Toronto and going 9-6-3 in his 21 games. For the 1990-91 season, there seemed to be a set-back thanks to the knee-cap injury. Former AGM Peter Ing took over Reese's spot and Reese struggled, as he went 2-7-1 to start the season and it got him sent to Newmarket for retooling. Reese would only get three games in with the Saints because of the stacked goaltending, but we went 2-1-0 in those games. Reese got recalled in the new year and went 4-6-2 before he broke his transverse processes, which is used to attach muscles in the vertebrae, and was out the rest of the year. The 1991-92 season started off rough again for Reese, as he went 1-5-1 in his first eight games. He would then be involved one of the biggest moves in NHL history.

Reese would finish the 1991-92 season backing up Mike Vernon in Calgary going 3-2-2 in his games. In the off-season, Reese had more bad luck; cutting his hand before the season, which saw him miss three games at the start of the season. Reese did see 23 games behind Vernon, going an astonishing 14-4-1. Reese would also set a record for most assists by a goalie in a game. On February 10th, 1993; during a 13-1 romp of the San Jose Sharks, Reese had three assists for his team-- not bad for a guy up and down through the system. Reese would only play one game for the Flames in the 1993-94 season (a no-decision) before he was on the move again.

In November of 1993, the Flames sent Reese and future considerations to the Hartford Whalers for Dan Keczmer. Reese would be back into a logjam in Hartford playing behind Sean Burke and two former AGMs, Frank Pietrangelo and Mario Gosselin. Because of that, Reese would only see 19 games, but went 5-9-3 for the year. Thanks to the work stoppage, Reese would only have to deal with Burke, but thanks to struggle-- his record was a less than desired 2-5-1 in 11 games. With yet another AGM, Jason Muzzatti, waiting in the wings, Reese only got seven appearances with the Whale in the 1995-96 season (2-3-0) before he set sail again.

The Whalers traded Reese to the Tampa Bay Lightning for a ninth-round pick in the Draft. Reese was the back-up to another AGM, Daren Puppa, and played in 19 games with an even 7-7-1 record. It was very short-lived as Reese was traded in the off-season to New Jersey for Corey Schwab. The 1996-97 season saw Reese play only three games (0-2-0) with the Devils before being send down because of yet another logjam in net. He would then spend most his time in the IHL with the Detroit Vipers, playing 32 games and going 23-4-3 with a 1.87 GAA. His played helped the Vipers in the playoffs where they won the Turner Cup for the season. Reese would share the James Norris Trophy for lowest GAA with Rich Parent that season. It would be another year for Reese in the IHL for the 1997-98 season, as he played again for the Vipers and Reese shined more with a 27-9-8 record and was able to help the Vipers to the IHL Championship again, but lost to the Chicago Wolves.

Reese was a free agent for the duration for the 1998-99 season before signing again with where he started in Toronto in January of 1999. Reese would only play two games with Toronto (1-1-0) before being sent to the AHL and the St. John's Maple Leafs where he would keep his minor league magic alive, going 17-7-3. Reese would be traded in the off-season to the Tampa Bay Lightning, again, but Reese would call it a career before he ever played again for the Bolts.

However, after his career, Reese would go on to coach the Bolts starting in the 2001-02 season, as a goalie/assistant coach. Reese had a helping hand in the Bolts 2004 Stanley Cup victory. Reese spent eight seasons with the Bolts before getting into the Philadelphia Flyers organization this summer as goalie coach-- for which he obviously has his hands full in his first year.

With all the beating and banging, Reese found his spots when he needed and was able to do the job when called upon. While he did bounce around the league and between the minors and pros, he didn't seem to give up when he could have easily faded away into the background. With all the knowledge took from training and grinding to get his playing time, he uses now to mentor the other goalies coming up through the ranks and to help them with some logjam issues they may face. Plus, with his six interactions of other AGMs; he takes over Vincent Riendeau for most interactions of this series.
Posted by ScottyWazz at 3:05 AM