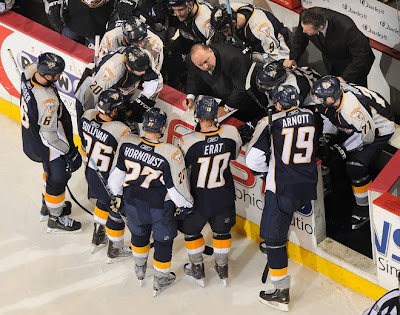 Another first round, another exit for the Predators. Although, after missing last year's playoffs-- the Predators do have something to look forward to next year, though I'm sure plenty of questions will spring up, as they always do, for how to remedy these early exits year-in and year-out for a fan base that seems to enjoy it when hockey matters.

It seems that the goaltending was selected when Pekka Rinne was re-signed, but you have to wonder if Dan Ellis could get re-signed, as well--just as a contingency plan to Rinne. While Rinne did have his bright spots, when he fell; he fell hard. To have Ellis back would give Chet Pickard another year to grow in Milwaukee and give Rinne a NHL-ready goalie to pick up some pieces. Especially with a defensive minded team like this, there's going to be a need for a two-goalie system, especially when you have some instability every now and again. Even so, the tandem of Rinne and Ellis could be for the greater good and worth the money if it means staying in the playoffs.

Offensively, the Predators could use some help. With only Steve Sullivan and Patric Hornqvist being over 50 points on the year, as well as Hornqvist being over 25 goals (Martin Erat was the other one over 20 goals); the need for some kind of goal support for the goalies is much needed. Hornqvist will need to be re-signed, as he is a RFA and probably going to be a strong asset in the franchise's future. Other than that-- the core will remain and with guys like Joel Ward starting to hit a stride, what more could you want other than execution on the goal-scoring front.

Defensively, the Predators have what most teams dream of. With the solid duo of Shea Weber and Ryan Suter, the Preds have a decent cornerstone for the future. The question on what to do with Dan Hamhuis will be a topic of the summer, though with Cody Franson coming up through the ranks; Hamhuis could be out in the free agent market because of a numbers game, as well as a drop in production over the past few seasons.

Much like the Sabres, who were eliminated the same day-- the question of Barry Trotz being on a short leash (with what neck, I'll never know) or not will come up. Trotz has been the only coach and David Poile the only GM. Even with all the good they have done to build up the future, it could be time for a message change and time for a new era of the Predators. Bring in someone who is new, like the team itself and maybe the fortunes will be different in the end.

The tools are there for the Predators, but it's a matter of actually getting it done. There's going to be a time where the cogs will fall into place and the hardship of first round defeats will be a distant memory. Odds are that it could come in the next few years with a little bit of work and little bit of change. They put up a solid fight and like other series; they could have one. But a bounce here and there really shot them in the foot.
Posted by ScottyWazz at 10:20 PM