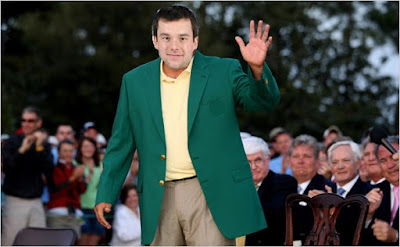 With the year coming to a close, the fantastic awards like the Rocket Richard Trophy for the most goals in the season (Sidney Crosby and Steve Stamkos) and the Art Ross Trophy for most points in the season (Henrik Sedin); as well as the William Jennings Trophy for least goals against (Martin Brodeur). But there's plenty of unhallowed awards that are unofficially handed out, but widely known.

First, which was great that this coincided with the Masters tournament, the Green Jacket award. In the Masters, the Green Jacket is awarded to the winner of the tournament and for the player who shoots the lowest score under par, or the best minus. This year, it goes with Patrick O'Sullivan of the Edmonton Oilers. The Oilers, themselves, were just horrific thanks to the injuries and pure rebuilding the team is going through, but O'Sullivan took it to new height with a -35 on the year, with was a difference of 85 to the Plus/Minus winner Jeff Schultz, who was a +50. O'Sullivan did this in only 73 games, so who knows what could have happened in those nine missing games. Shawn Horcoff and Rod Brind'Amour were tied for second at -29.

The Cy Young is a baseball award in the MLB for the best pitcher in the league, mostly based on record. The hockey version of it is the player with the biggest difference between goals and assists. The winner this year is Guillaume Latendresse of the Minnesota Wild with 27 goals and 13 assists, a difference of 14. Latendresse had a big jump after going to Minnesota from Montreal, but for a non-playoff team. Matt Moulson of the Islanders was second (30g, 18a-- 12 diff.) and Brian Gionta was third (28g, 18a-- 10 diff.) for this award.

Yes, this was a filler post, but it's something fun. I'm about fun....or not. Plus, you really want to recognize the craptasticness of the league worst and who is scoring more than they're dishing.
Posted by ScottyWazz at 9:45 AM

I feel like you really need to try to be a -35 ... that's a tremendous feat by Patty O'Sullivan.