The Conundrum of Ovechkin 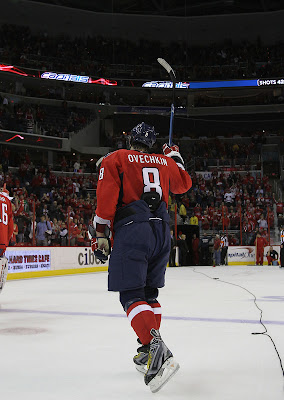 In the next few days, weeks, months-- the common tag when it comes to the Washington Capitals season is that Alex Ovechkin wasn't good enough to come through and carry the team, like a captain should. Of course, most of that will come from Penguins fans who will bring up Sidney Crosby's performance against the Ottawa Senators and others as a key to win their debate.

While Crosby did amazingly against the Senators, it's not like they're a shutdown style team with any assemblance of a hot goalie. You'll never get through to them because that's how they roll and until someone unseats them, they can have that "born on third and thought they hit a triple" kind of attitude. A recent Cup win gives you that entitlement, though Pens fans really don't need a reason.

In any case, the fact is that Ovechkin was keyed on solidly by the Habs after he picked them apart from Games Two to Four. He was able to get speed and space through the neutral zone and got a beat on the defensemen, who weren't able to keep up the pace with him. However, they made a smart adjustment by actually engaging Ovechkin and not letting him get any space, which didn't allow him to have a good shot and thus taking him out of the picture offensively. When he did get space, the likes of Hal Gill would step up to block anything thrown at them. You really can't fault Ovechkin since he pretty much tried to do everything to avoid the congestion, but it just didn't work. Which should create an interesting match-up for the Penguins, who will either fall to the same demise as the Caps or solve their former teammate Gill and be able to do what the Caps couldn't.

Regardless, Ovechkin tried to do what he could, but where he could have lacked is trying to motivate his teammates and get some more support out of them. Granted, the press would see that as him coming off as a prima donna, but it seems he can't win nowadays. Yet, if he couldn't get motivation out of his team, you have to wonder what kind of voice he actually has with his teammates. If he couldn't get a spark out of his guys to have a killer instinct, there's a character question that should need be addressed.

The funny thing about the Caps/Habs series is that the pundits and rival fans won't give credit where credit is due. The Caps were shutdown by the Habs defensively and it wasn't for a lack of trying, as the Caps had peppered the Habs with 134 shots in the last three games. Jaroslav Halak was insane stopping 131. Yet, even with his 10 points and 34 shots in seven games, it won't be enough to say that Ovechkin "choked" the series away. I know the rational of some people won't factor through, but it's hard to say he choked when he was atop the team scoring chart again, while the secondary scoring was nowhere to be found. If there's anything Ovechkin should be blamed for it's for not getting the rest of his team off the snide and motivated enough to help him out. Those lessons and motivational factors he'll learn in time.

Ovechkin will always have the onus of not showing up for big games....which couldn't be further from the truth in this game. I mean, ten shots in the final game, plenty of solid chances; including the called-off goal-- Ovechkin was very prominent, but the Habs defense was what shut him and the rest of the team down and they should get nothing but full marks.

Yet, you have to wonder if Crosby would be given the same treatment if he got no support from his teammates or if he would be given the benefit of the doubt because of the games he has won. Time will tell, but right now-- and as much as I hate to say it-- Crosby has the edge on Ovechkin due to playoff success alone. Once Ovechkin can get over that tag of "big game loser", then he can be truly considered elite.
Posted by ScottyWazz at 10:30 PM