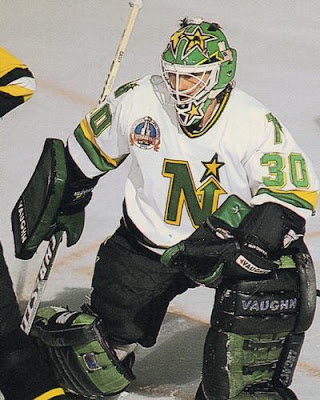 With the NHL rolling out their new "History Will Be Made" playoff advertisements, it caught my eye of a nominee that I've yet to do. It's one guy who was in two of these advertisements, but always at the butt-end of them, looking like a fool....with his pants on the ground. In one, he's being undressed by the Magnificent One; where in the second, he's getting schooled by a 40-foot slapper by Stevie Y. That's right, this week's AGM is the one and only-- Jon Casey.

Casey started out his career by being accepted into the University of North Dakota starting in the 1980-81 season. He saw limited time in his freshman year, playing six games and only sporting a record of 3-1-0. In his sophomore year, Casey would split time evenly with Darren Jensen and Pierre Lamoureux, though Casey would get a few more games in. Casey would play in 18 games and go 15-3-0. His strong play that season got him a spot on the USA World Junior team, but in his five games he had a 1-2-0 record, not to what the USA was thinking. Casey's junior season in 1982-83 was a less than stellar one, as he would split time again, but went 9-6-2 in his 17 games. Undrafted, Casey had a lot to prove in his senior season in the 1983-84 season, where he would get he bulk of the time, playing 37 games and going 25-10-2 for the season. Casey was able to get NCAA First Team All-American for that season.

It also caught the eye of the Minnesota North Stars, who signed Casey on April 1st of 1984. Casey would play two games with the North Stars, going 1-0-0, before the season ended. The 1984-85 season saw Casey start to hone his professional game, for which the North Stars sent him to the AHL's Baltimore Skipjacks. Casey was fantastic with the Jacks, as he would go 30-11-4 with four shutouts and a 2.63 GAA. Casey won the Hap Holmes Award for lowest GAA and the Baz Bastien Award for best goaltender. Casey got the Jacks to the finals of the playoffs, but they fell short to the Sherbrooke Canadiens.

Casey would start the 1985-86 season with the Springfield Indians of the AHL, playing nine games with a 4-3-1 record before being called up by the North Stars for the duration of that season to back-up Don Beaupre. Casey got 26 games in and went an even 11-11-1 for the year. However, the 1986-87 season saw Casey back in the minors with Springfield in the AHL, 3-8-2 in 13 games, and then sent to the IHL's Indianapolis Checkers, where in 31 games he went 14-15-0. The 1987-88 season saw Casey spend the balk of the time in the IHL with the Kalamazoo Wings, where his game got back on track with a 24-13-5 record, while getting some call-ups to Minnesota for 14 games on a less than stellar team going 1-7-4.

Luck shined on Casey for the 1988-89 season, as current starter Beaupre was traded to the Washington Capitals. Casey would get the starting role because of it and he did what he could for the team he had in front of him. Casey's first year starting would go 18-17-12 in his 55 games. It would start Casey's stalwart job as the North Stars' goalie. The 1989-90 season saw better fortune for the team and Casey, as he would go 31-22-4 in his 61 appearances. It only set up for his 1990-91 season, where he would go a so-so 21-20-11 on the season, but he got on a hot streak at the right time, helping the North Stars run wild through the playoffs. Casey went 14-7 in the playoffs, but they met their match in the Stanley Cup finals, as the Pittsburgh Penguins took them out in six games. It would get rough for Casey in the 1991-92 season, as the curse of losing the Cup took its toll, going 19-23-5 for the North Stars, while having a stint with Kalamazoo, going 2-1-1 in his retooling games. The 1992-93 season was a bit of a bounce back for Casey, as he would get better with a better team in front of him and a 26-26-5 record with a 3.33 GAA. It would be the team's last year in Minnesota, as they moved to Dallas after the year...and it would be the last year for Casey with the franchise.

During the off-season, Casey was traded to the Boston Bruins for Andy Moog, which was the future considerations part of an earlier deal between the two teams, where Gord Murphy went to Minnesota. Casey would be thrown into the starting role for the Bruins, as he would go 30-15-9 in his 57 games and would get the Bruins into the playoffs, but they were stopped in the second round with Casey going 5-6 for those games. His tenure in Beantown was short-lived.

Casey would sign in the off-season with the St. Louis Blues. Casey back-up Curtis Joseph in the shortened 1994-95 season, going 7-5-4 with a 2.75 GAA for the season. It was a slight change for Casey in the 1995-96 season, as Grant Fuhr came to St. Louis and Casey lost the back-up job to Bruce Racine, which sent Casey to the Peoria Rivermen of the IHL. He made the most of his demotion, going 21-19-2 in his 43 games, which got him a call-up late in the year and got him nine games with St. Louis, going 2-3-0. The playoffs were Casey's time, as he got the call in place of Grant Fuhr, who had to have surgery on his knee after the first game. Casey stood strong, but couldn't help the Blues and they lost in Game Seven to the Red Wings, which is where the second "History Will Be Made" commercial came from. Casey went 6-6 in those playoffs. The first half of the 1996-97 season would see Casey backing up Fuhr, but thanks to Fuhr being a workhorse, Casey only saw limited time. In St. Louis, Casey went 3-8-0 in his 15 games and went 2-1-1 in his four conditioning games with the Worcester Ice Cats of the AHL.

Casey would not be retained by the Blues of the 1997-98 season, and he went to the IHL with the Kansas City Blades. Casey would play in 24 games going 9-13-4 with the turnstile goaltending in the IHL, which included former AGMs Pokey Reddick and Peter Skudra. Casey would retire midway through the season. Since then, Casey has gone AWOL.

While he was made famous for two things that were detrimental to his career, it stills shows he'll always be in the spotlight. While he didn't have the most stellar career, he shows that he could be thrown into a situation and still thrive somewhat. At least he was able to finish above .500 in both regular season and post-season records, so that has to count for something.
Posted by ScottyWazz at 8:15 AM

1994 round 2, devils vs bruins Jon Casey makes best save ever, see it, if you can find it.