Is There A Comeback Kid Amongst Us?? 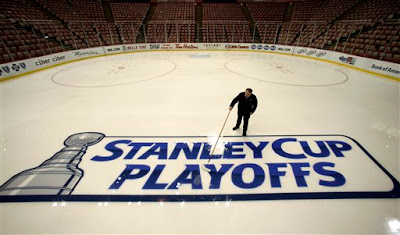 The Eastern Conference has all their series with one team up three games-to-one. While it seems that all hope is lost, the only redeeming quality is that it's nothing too insurmountable. In fact, all the teams who are up 3-1 have had a history of collapse when in that position. There have been 21 comebacks when a team was down 3-1, eight from the Conference Quarterfinals, last one coming last season. Buffalo and Ottawa are the only two teams in the East to not be involved in any lost deficits.

We'll start with a team from tonight that could clinch, and the first team in the modern era to blow a 3-1 lead, the Pittsburgh Penguins. Now, the Penguins are up 3-1 on the Senators, but the Penguins were the first to blow the big lead when they did it against the New York Islanders back in 1975. In fact, the Pens were up 3-0 on the Islanders and couldn't put them away. On the flip side, the Penguins have twice comeback from the 3-1 deficit.

That's something the Washington Capitals fans know all too well; with the Penguins coming back on the Caps twice within three years, in 1992 and 1995; which has spawned the hatred with the Caps and Pens to this day. The Caps and Pens are tied into the same instance, as the Caps blew a 3-1 series lead to the Islanders in 1987, which included the epic 4OT game where Pat LaFontaine beat Bob Mason on Easter Sunday to win it. However, the next playoffs in 1988, the Caps were able to comeback from being down 3-1, as they defeated the Philadelphia Flyers; which included the iconic Caps goal of Dale Hunter beating Ron Hextall in OT of Game Seven to beat the Flyers. The Caps did it again last playoffs when they were down 3-1 to the New York Rangers before mounting a big comeback on the back of Semyon Varlamov.

The Flyers would first blow a lead like that in 1988, but wouldn't be the last. The 2000 Conference Final, the Flyers blew a 3-1 lead to the New Jersey Devils, their opponents this round; which had the same goalie match-up of Martin Brodeur against Brian Boucher. The Flyers have not been able to comeback and erase those memories, but they hope not to repeat history; especially with the injuries mounting for them.

The Boston Bruins were the last team pre-Lockout to blow a 3-1 lead to the Montreal Canadiens, where the Canadiens outscored the Bruins 12-3 in the final three games and really spelled the start of Andrew Raycroft's Blaine Lacher-esque downfall, as he had a stellar regular season, then horrific post-season and here he is now.

There is hope for all the Eastern teams down, two of which are higher seeds and expected for big things. While it hasn't happened post-Lockout, you can never count any team out in this day-in-age. If teams can comeback from down big in the games, who's to say they can't come back from down big in the series?? May as well give some kind of hope to fans who think all is lost.
Posted by ScottyWazz at 9:45 AM

The last team to blow a 3-1 lead was actually the New York Rangers, who lost 4-3 to the Caps in the first round last year after being up 3-1.

Yeah-- I edited the top part after forget about that whole thing (and as a Caps fan, I should have known better), but forgot the bottom part. Good catch.