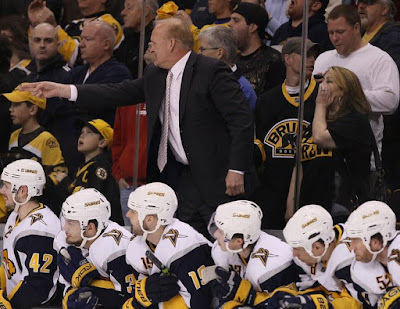 After battling through a tough season, having won the Northeast Division crown, not many had expected the Sabres to be out after the first round. But untimely injuries and running into another hot goaltender spelled the Sabres' demise. Now, they have to regroup and wonder what went wrong and how they can remedy this from happening again.

The Sabres seem to have the same issue the Devils had, where they relied a lot on goaltender Ryan Miller. While Miller didn't play as much as Martin Brodeur, he was 4th in shots against; so you know he was peppered. Plus, you have to see how much and how well he played in the Olympics, so that had to take it's toll as well. While Patrick Lalime may not be the answer as a full-time back-up, he's good enough to not take away development time for the like of Jonas Enroth or Connor Knapp, for the time being. With Miller being as young as he is-- he can play this much, get shelled, and not get TOO worn out, but there's going to come a time where the Sabres will have to think about a better back-up to give Miller a rest now and again and not have to worry about losing without him in net.

Offensively, it seemed to be scoring by committee, with only Thomas Vanek and Derek Roy with over 25 goals on the season. Both Tim Connolly and Jason Pominville also had a solid season, but you have to wonder how the lack of goals will be a hinderance in the future seasons. Luckily, the playoffs showed the future, with Tyler Ennis and Tim Kennedy in the top-five in team scoring for the Sabres' playoffs; so if they can actually get some playing time during next season, then they could add to the committee scoring tactics or maybe break away from it all. One thing you wonder if what Vanek's trend could be. Even though he played two less games than last season, he had 12 less goals. You hope it doesn't become a Jonathan Cheechoo situation, but it has to be in the back of the mind of some....or just me.

Tyler Myers is the defenseman of the future for the league and the Sabres. The rookie showed a lot of maturity and it's showing with his Calder Trophy nomination and the buzz that surrounded him. However, beyond him-- there's not much the Sabres can really throw out as being fantastic. Toni Lydman was consistent, as well Steve Montador; yet neither jump out at you as being solid options when it comes to being THE defensive stalwart. Although, I guess pre-Myers, Henrik Tallinder would be the guy-- and he was quietly decent this season, with a career high in assists. Myers throws an offensive spark into his defensive side of things, thus making him even more valuable and why he'll be the face of this defense for years to come.....so long as he doesn't have a stumble.

Though you have to wonder if Lindy Ruff will be on a short-leash with this loss. I know he's be around for years, but is there a time where a change will be the thing that gets the team to the next level. While it'll take GM Darcy Regier to be fired to make this happen, who knows if it ever will. Ruff has done a lot with this team with a lot of components of the team changing in recent years. It'll be a catch-22 if it got to that point, but still something that'll be interesting to look at in the beginning of next year.

There's a lot of hope for the Sabres still to come and while this was a hiccup when there are expectations for this squad, you have to take the bad with the good. They have a great young defenseman, they have a goalie would could probably take home both the Vezina and MVP award this year, but with all the defense; the offense (or lack there of) could be the one thing that holds this team back from the ultimate glory of winning a Stanley Cup.
Posted by ScottyWazz at 9:00 PM