What's Next For The Wild 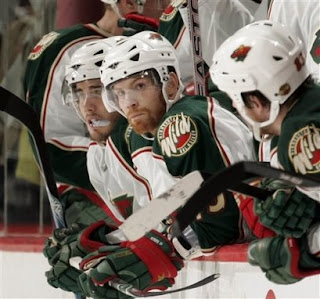 The Wild are the first team out of the Western Conference to be eliminated and the first divisional leader to be ousted as well. Going into the series with the Avalanche, it looked very promising as the Wild took the season series 5-3, but the lack of production after going up two game to one (only four goals in the last three games) ultimately became the demise for the team from the State of Hockey.

In order to keep the scoring going, they'll need to get their second-leading goal-scorer Brian Rolston under a new contract. In order to do that, they would have to cut ties with Pavol Demitra, which seems to be heading that way anyway-- so that works out perfectly. Also, they'll have to get P-M Bouchard under a new deal to help build for the future. On top of that, they have to hope that Marian Gaborik can build off his career year in all categories (42g, 41a, 83p) and slowly started to get the leadership qualities the team was hoping he could develop.

On the blue line, Brent Burns developed into a great two-way defenseman leading all defensemen in points for the Wild and leading in plus/minus as well. Though injuries to Kurtis Foster and Nick Schultz hindered the Wild in the playoffs, the lack of production from Kim Johnsson all season and bad defensive play by Sean Hill and Martin Skoula didn't help the team's cause either. Hill, Petteri Nummelin, and Keith Carney are all UFA this summer, with Carney being my choice as the only one to get re-signed.

As a first year starter, Niklas Backstrom was huge. With a 33-13-8 record and a .920 save percentage, Backstrom solidified his place into the #1 goalie realm. Josh Harding has a rough sophomore campaign, going 11-15-2, but played well with a 2.94 GAA and .908 save percentage. Both are in their contract year in '08-'09, but I can see them being the goaltending tandem for the Wild for many years to come.

With a new owner in Craig Leipold, who knows if Doug Riseborough and Jacques Lemaire will still be at the helms of the Minnesota Wild, especially after a quick playoff exit. Lemaire could go just to start a new movement behind the bench and a fresh start. Though you can't blame anyone for the defeat, they just ran into a hot team down the stretch and it's never easy when coming out of the Northwest Division.
Posted by ScottyWazz at 8:44 AM

Email ThisBlogThis!Share to TwitterShare to FacebookShare to Pinterest
Labels: Minnesota Wild, What's Next