What's Next For The Devils 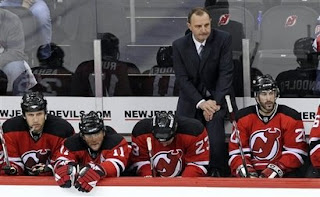 After a halfway decent regular season, the lack of scoring and lack of strong defense became the demise for the New Jersey Devils, so now it's back to the drawing board for Lou Lamoriello to see where they went wrong, where they can improve, and how to get further next year.

Offense will have to be addressed, as of all 16 playoff teams, the Devils were 15th in goals for and in the league, they were 26th with their 206 goals on the season. The only upside to the offense was Zach Parise putting up a 30-goal season and John Madden potting his first 20-goal season since the '00-'01 campaign. However, Patrik Elias had a big drop-off in production, while Brian Gionta hasn't found the scoring touch that allowed up to put up 89 points in '05-'06. Many can attribute this to losing Scott Gomez to free agency this summer.

The defense was a bit of a surprise, as the Devils let up under 200 goals for the first time since the lockout. Even with the loss of Brian Rafalski, guys like Paul Martin and Johnny Oduya took control of the defense and made the Devils look pretty good, even without the big names on the blue line. In addition, both Martin and Oduya were able to help with making the first pass out of the zone to create offense from the back-end.

Brent Sutter's first venture behind an NHL bench was a trying one at first, but it got better and better as the season went on. I think as Sutter gets more and more comfortable with his team and with what he needs to do in order to win, he could be a great coach in the NHL. The Devils and Lamoriello just need to give him some more time to flourish before cutting ties with him.

This summer, offense should be something that the Devils should focus on. They'll have plenty of options out there, though whether they want to spend the money will be the true "wait and see" point. Another "wait and see" point is whether or not Kevin Weekes will get more time next season, especially with the flame-out the Devils had this playoffs. They'll have plenty of time to look back and think about what went wrong, as they are the second team in the league and in the Eastern Conference to be out of the playoffs.
Posted by ScottyWazz at 3:04 PM