Jumping Onto The Bandwagon Early 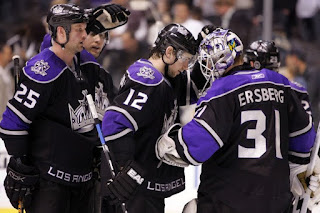 I've decided that I'll go ahead and be a trendsetter. Instead of waiting back, I'm officially going to back the Los Angeles Kings as the next team to strike it big in the NHL. Much the way the Pittsburgh Penguins and Washington Capitals have made it, so too should the Kings in the next two to three seasons. And why not, this is a team that is only missing a few components to be the next success story.

First off, the Kings will have to clear up their goaltending situation. The Dan Cloutier experience, which could be my next band name (maybe with Cloutier in it), bombed badly. Adding insult to injury, they lost Mathieu Garon to the Oilers, Jason LaBarbera was inconsistent and got hurt, and Jonathan Bernier was sent down to protect him from a shelling. However, there seems to be light, Cloutier will probably get bought out, Bernier looks to be the next Carey Price story, LaBarbera will likely be ready for the full season this fall, and Erik Ersberg played surprisingly well down the stretch. 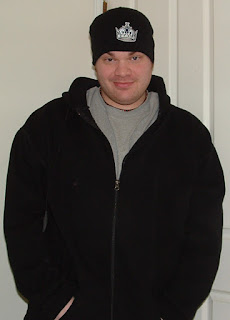 With that out of the way, the defense will be the next thing to look at. Jack Johnson is obviously the future and will need some time to bloom into that premier defenseman. With the #2 pick in the Draft in June, odds are the Kings will also pick up Drew Doughty to help bulk up the blue line. Lubomir Visnovsky and Tom Preissing will have to be the gap between the youngsters and Rob Blake to make the transition a little smoother.

The last problem could be behind the bench. Marc Crawford doesn't seem to be the right fit for this young team. The blending of ideals isn't clicking and I wouldn't be surprised if Crawford was going to get canned if the team doesn't get off to a good start in '08-'09. Who they could replace him with, who can say. The move could be quicker if another team ditches their coach....like say, the Islanders. It'll be Crawford's time to shine if he can't get something going.

The only thing the Kings won't have to worry about is offense. Anze Kopitar, Dustin Brown, and Alexander Frolov have lead the way. Patrick O'Sullivan made a big surge before the end of the season, while Mike Cammalleri's stock may have dropped, but with him becoming a UFA at the end of the '09 season, it may not be a trouble to ditch him.

It could be happy days again in Los Angeles. They may have lost some fan base due to the Anaheim Ducks winning the Cup last season, but if this young team can make some noise, the stars will surely shine bright in the Staples Center.

So, there you are LA Kings and fans. The Scotty Wazz Seal of Approval. It could either be a good thing or the kiss of death for an entire franchise-- either way, it'll be a great thing to wait and see for. If it does mean good things, let it be known that I was the first to believe. Maybe you can invite me to a game and I can schmooze with the stars and maybe hook-up with Ellen Page....hey, a guy can dream.
Posted by ScottyWazz at 11:28 AM