What's Next For The Bruins 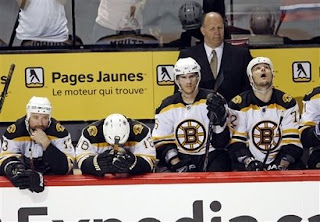 The comeback for the Bruins did not happen as planned, but they had plenty to build off on. With some of the slumps they had, the Bruins were lucky to get into the playoffs at all and pushed the East leading Montreal Canadiens to the brink.

Most, if not all, of that can be contributed to Claude Julien's coaching. Julien was brought in and made a big impact on how the team was coached. Julien made the team buy into his system, which translated into success on the ice. Though they did have some rough patches, Julien was able to get the team to persevere through it all and get a playoff spot. There's no question why he's a front-runner for the Jack Adams Award.

One of the things Julien and GM Peter Chiarelli may need to look at is getting some kind of secondary scoring for the Bruins. Marc Savard and Marco Sturm were really the only guys up front consistently contributing. Phil Kessel started to show signs of life in the playoffs and Chuck Kobasew was potting goals here and there, but more will be needed to stay competitive. If the Bruins can find another forward to contribute, the team could be a well-rounded offensive threat.

Defensively, Zdeno Chara was sound both on the back-end and in creating offense. Dennis Wideman was also a pleasant surprise, putting up a career year in goals, assists, points, and plus/minus. Mark Stuart and Aaron Ward were both very sound on the blue line, but Andrew Ference could be the the weak link for the Bruins blue line. The main thing for the Bruins is to get Ward and Wideman under contract in order to keep this core group of blue liners in tact.

We joke on the Show all the time that the Bruins need a goalie, especially considering the amount they have on their roster now. That said, in the absence of Manny Fernandez to a knee injury, Tim Thomas took the reigns and ran with it. He showed that he has what it took to be a starter in the NHL. After being acquired from Phoenix, Alex Auld played reasonably well when called upon by the team. Auld is a UFA this season, but this display may warrant him a small contract. That said, with Fernandez and Thomas under contract for another season and Tuukka Rask waiting on the sidelines-- it could be a very crowded crease in Beantown.

It could be considered a success for some, a disappointment for others; but it's a start. If the Bruins can some loose ends tied up, they could get back to their glory days.
Posted by ScottyWazz at 12:13 AM

Email ThisBlogThis!Share to TwitterShare to FacebookShare to Pinterest
Labels: Boston Bruins, What's Next