What's Next For The Flames 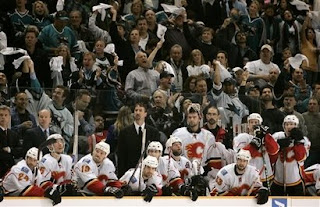 The Flames best players were their best players in this series. The problem is, the three top players were really the only ones to show up in any way shape or form. There's plenty to wonder in Cowtown of what went wrong, how to right the wrong, and what to do with some key free agents.

Secondary scoring is something that will have to be addressed this summer. Jarome Iginla was amazing, potting 50 goals and 98 points, while the next highest player was 20 goals and 21 points behind him. Daymond Langkow was the alternate goal scorer and should get a contract offer on that point alone. The second leading point getting, Kristian Huselius, may have fallen out of favor with the Calgary brass due to his play down the stretch. Owen Nolan's play in the playoffs and down the stretch could get him another contract if he wants to come back, while Craig Conroy may come back at a lower cost.

Defensively, the Flames could have been much better, but Dion Phaneuf showed that he will be the anchor for many years to come. Robyn Regehr and Adrian Aucoin will help nurture him to an even higher level of play and leadership before their tenures are done. However, the defense will really need to help out their goaltending, as the Flames were giving up many more goals than desired.

Of course, Miikka Kiprusoff has plenty of rough patches this season. He wasn't named a Vezina finalist for the first time in four years, which should come as no surprise due to his 2.69 GAA and only two shutouts to his credit. Something will have to be addressed when it comes to their youngsters in net, as well. Brent Krahn and Curtis McElhinney are UFAs this summer and if they want to keep their goaltending prospects, they should get thei act together in regards to how they want to develop them.

Another thing to look at is the special teams for the Flames. The Flames were 20th on the PK and 19th on the PP this season, which could be their Achilles heel if they can't get it fixed in time. They have the tools to make a great power play and penalty kill, but they need to be consistent in order to get a better rank and have a more favorable opponent in the playoffs.

The Flames were the only Western Conference Canadian team to make the playoffs, so they can be proud of that. The problem is they will need to be able to get past the first round to really show how successful they have become.
Posted by ScottyWazz at 9:01 AM

Email ThisBlogThis!Share to TwitterShare to FacebookShare to Pinterest
Labels: Calgary Flames, What's Next