What's Next For The Ducks 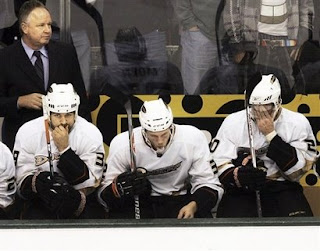 It wasn't meant to be for the Anaheim Ducks to repeat as Stanley Cup champions again. Now, there are plenty of questions that are leading into the off-season and leading into the '08-'09 season.

The obvious question is what's next for Scott Niedermayer and Teemu Selanne. Both took their time this season to figure out if they were going to come back for a "last hoorah" and go for another Cup. This season, the Samuelis, owners of the Ducks, as well as GM Brian Burke won't be as patient. Selanne is a free agent, so the Ducks can veto a return for him, but Niedermayer is contractually obligated for another year, which will make Burke force the issue for a decision.

That is if Burke is still around. Though he has a year left on his contract with the Ducks, Burke's name has been brought up for the Maple Leafs and Canucks vacant GM positions. Burke has repeatedly said that he will stay in Anaheim, but the business of hockey is always changing, so you never know what's around the corner.

The offense will be a big concern for the Ducks, as they were ranked 16th of all playoff teams in goals for and tied for 27th in goals for (205). The definites for next season is the fact the Ducks have most of their key cogs signed up for a while. Ryan Getzlaf and Chris Kunitz have been re-signed, and Corey Perry is the last to be re-signed. This core group of players will lead the Ducks into the future. Doug Weight is the only other forward, aside from Selanne, whom is a UFA this summer. Perry, Ryan Carter, Drew Miller and Brian Sutherby are RFAs of the rostered players. With the young core in tact, goal scoring should become more prevalent, injuries aside.

Defensively, the Ducks are solid with only Joe DiPenta as a UFA. The rest of the blue line is re-signed for next season, so it's up to Niedermayer to see how intact it will be. The defense was very crucial this season, helping the Ducks to the 2nd least goals given up (191), only behind Detroit (184).

In net, J-S Giguere had his problems with injuries, but still racked up 35 wins and a 2.12 GAA. The surprise in net was the play of Jonas Hiller. The Swiss netminder went 10-7-1 with a .927 save percentage and 2.06 GAA. This performance may have gotten the RFA netminder another contract.

It wasn't meant to be for the Ducks, with a slow start, but strong second half. The chemistry didn't seem to be there when the Ducks needed it the most. The Ducks will be the most looked after team this off-season, especially considering all the questions surrounding the former Cup champs.
Posted by ScottyWazz at 9:28 AM

Email ThisBlogThis!Share to TwitterShare to FacebookShare to Pinterest
Labels: Anaheim Ducks, What's Next