What's Next For The Capitals 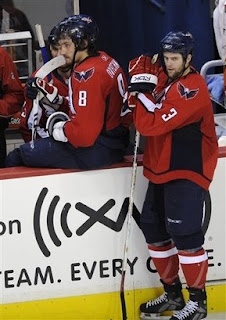 It was strong effort, a strong run, but it came up short for the Washington Capitals. However, it's something for this young team, who was left for dead in November, can build off of and take as a learning experience. It took overtime in Game Seven to end the dream season-- but now it's time to see where they can go in order to advance as a team.

First and foremost, Caps' GM George McPhee needs to extend contracts to Cristobal Huet, Matt Cooke, and Sergei Fedorov. These three acquisitions at the deadline proved to be nothing but good for the Caps and should be able to help the Caps more so over a full season. Especially with Huet, who was amazing down the stretch for the Caps and allowed them to get into the position they were in.

Secondly, the Caps need to look to the free agent market or trade pipeline in order to get some solid defenders in the mix. Granted, the Caps defense wasn't horrible this season, there's too many inexperienced players in the starting line-up. Bring in one good, experienced defenseman, who can sit back and play defense, and the Caps should be good on that aspect.

The offense was the big x-factor for the Caps, with Ovechkin, Backstrom, and Semin showing their muscle through the season and in he playoffs. Ovechkin is in Washington for 13 more years, Semin and Backstrom have contracts through the '09-'10 season-- so the goal-scoring should be set. They will have to get role players like Brooks Laich, Eric Fehr, Boyd Gordon, and Matt Bradley under contract as well.

There are one or two holes to sure-up before the Caps can make a large push to the Stanley Cup, but to push as hard as they did and give it all they had until the last goal is a great start for this young team. It's almost a good thing this Caps squad did lose, so they will now know how it feels and they will have that hunger to win at all cost.
Posted by ScottyWazz at 8:08 PM

Email ThisBlogThis!Share to TwitterShare to FacebookShare to Pinterest
Labels: Washington Capitals, What's Next