On the Topic Of Vindictive Reporting 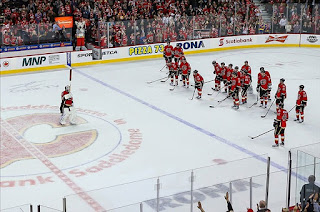 Morning Radio Zoo co-host and part-time sports writer Eric Francis had a gem of a column today when it comes to what he's been able to put together. In his recent piece, Francis said that Flames goalie Miikka Kiprusoff should have been more forthright with the Flames about his impending retirement rather than have the news break thanks to the Finnish media. Also, Kipper should have done more of an exit for the organization, fans, and community.

Of course, Francis forgets that whole thing about Kipper saying he wouldn't show up if moved at the trade deadline, but who needs to remember that to put out a story about how he personally feels let down that Kiprusoff didn't make a bigger exit.

And forget that on April 16th, Eric Francis knew that this was Kiprusoff's last home-stand and on April 17th reviewed Kipper's last game and wrote, "The end is near ­-- one day away in fact. Kiprusoff may not go out with much fanfare, but he seems focused on going out in style -- something he certainly did Wednesday night as the game's shining star."

Yet, it seems that Francis was shocked (SHOCKED) by Kiprusoff not giving a big farewell. Luckily, a Calgary writer named Eric Francis (yes, the same guy) knew that when he wrote on the 16th:


After rounding out the season -- and most likely his career -- on the bench watching Joey MacDonald audition for Kipper's old gig, the bearded Finn will no doubt punctuate garbage-bag day by doing his annual backdoor dash.

No sayanora (or however you say goodbye in Finnish) news conference thanking the fans, city or organization for embracing him and his family over the years. After years of fishing pucks out of his net with a stunningly calm sweep, swig and stare at the Jumbotron, far be it for Kiprusoff to get all misty-eyed at the prospect of perpetual anonymity, peace and quiet in Finland's remote lake district.

He'll leave just like he arrived; under the radar.

The fact that Francis thinks that he was let down by Kiprusoff not giving the Flames, their fans, and the media more of a send-off is just another example of writers thinking it's a little more about them and a little less about the facts of the story that have been out there for a while. Even written by Francis himself.

This is one day after Randy J. Miller of the South Jersey Courier-Post went on a Twitter tirade about Ilya Bryzgalov's antics in the locker room were the big thing that got him bought-out by the Flyers and not the media scrutiny that Bryzgalov had implied during the season-closing interviews.

No player or coach or GM owes writers much of anything. Even if there's something pressing, just because the information isn't put out there doesn't mean the writer has to take it as a personal insult and then try to actually embarrass the organization by airing out their own personal gripes because they didn't get exactly what they wanted. This isn't the toy store and writers don't need throw a tantrum just because the overseer doesn't allow them to get something because the writer thinks they deserve it.
Posted by ScottyWazz at 11:42 AM