Thanks For Coming Out, 2013 Boston Bruins 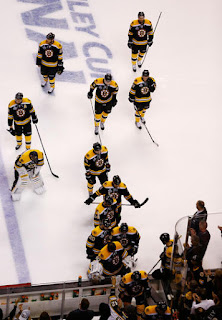 With a team who was hidden in the fourth spot in the East, the Boston Bruins overcame a first round scare and had the whole city on their back for the ride as they got to the Stanley Cup Finals, but the counterattack was a little too much for the Bruins, but a lot to build off of.

One big bright spot is David Krejci's production in the playoffs, only seven points off his regular season output in 25 less games. With his budding performance, you can bet that Krejci will be the focal point along with Patrice Bergeron for the Bruins offense, despite them being a primarily defensive team. On the flip side, the snake-bit nature of Tyler Seguin's post-season is something that could be a worry going forward if he can't shake it off.

The play of Tuukka Rask definitely made the Bruins fans forget about Tim Thomas's off-ice wrangling; though many though Rask was more than ready when Thomas was already there. Keeping the Bruins in many games and facing a ton of shots, Rask is showing that he could be considered a top-tier goalie, so long as his temper and focus are kept in check.

The young guns on the defense, Torey Krug and Dougie Hamilton, are going to be maturing more and more as the summer and into next season comes. Krug had an early showing of what he could do in the playoffs to start and should be able to build off that, while Hamilton got a taste of the experience though he didn't play all that much. It is still Zdeno Chara's defense, though the Blackhawks seemed to have a game plan that worked against Chara's size and strength.

For the Bruins, it's a bright future and continues to have a nice little feeder system working for them that allows their younger players to get into the line-up quickly and the system that's in place allows them to succeed on the big stage and allows them to get noticed quickly. While this defeat hurts, the fact is that they'll be able to learn from it on the fly and adjust as needed.
Posted by ScottyWazz at 8:01 AM

Email ThisBlogThis!Share to TwitterShare to FacebookShare to Pinterest
Labels: Boston Bruins, Eastern Conference, Stanley Cup Finals, Thanks For Coming Out