Here's To You, 2013 Chicago Blackhawks 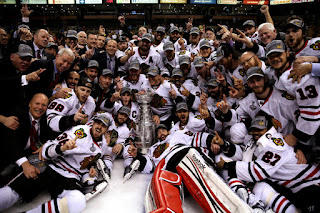 Corey Crawford was the breakout star of the playoffs and the season for the Blackhawks. While some people draw parallels to the 2010 goalie star, Antti Niemi; Crawford did draw plenty of criticism for his inconsistent play, despite keeping the Hawks in many games. However, next year will be the litmus test for Crawford with a full season ahead, but the confidence he has to have now is going to be amazing.

Upfront, the best offensive players were the best for the Hawks, with Conn Smythe winner Patrick Kane leading the charge and Jonathan Toews being the leader by example. The biggest thing for the Hawks is Brandon Saad coming into the line-up and contributing like he did. For a franchise to have the model to bringing up young players and getting them to contribute quickly, Saad just falls into line of what Kane and Toews did for the Hawks.

Outside of the top two of Duncan Keith and Brent Seabrook, Johnny Oduya became the surprise for the Hawks, playing solid defense and contributing when needed on the offensive side, especially during his slide during the Atlanta/Winnipeg years. Nick Leddy contributed for the Hawks in the regular season, but did have some shaky times during the playoffs; which I'm sure will come into play during contract talks this summer.

And speaking of contract, the Blackhawks may have to break-up some of their team as they did in 2010. With only $2M in cap space going into next season and two more players to sign-- not to mention UFAs and RFAs; the Hawks may need to do something creative in order to get some breathing room going into the season. Luckily, two amnesty buyouts are available and may have to be burned this summer rather than having to wait for next off-season.

You can bet they won't think about that now. The party is on in the Windy City, the Second City, That Toddlin' Town, City by the Lake, City with a Lot of Nicknames-- and it won't be rained on today.
Posted by ScottyWazz at 8:28 AM