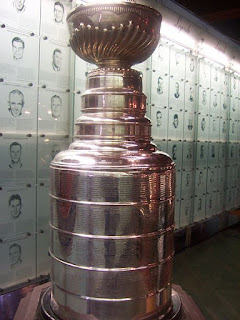 It's come to this. We've all waited nine six long months for the Stanley Cup to be presented and the Finals are just a day away. Why not be like the other cool kids and actually make a pick that will be a 50-50 shot because I'm either right or wrong. 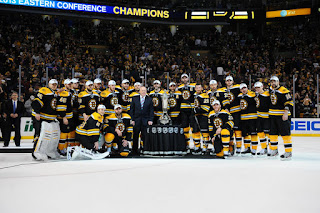 Out of the East are the Boston Bruins, who were pushed to the brink in the first round; but since then have been world beaters. You can almost sense that the first round scare could have been a wake-up call this team needed to stave off the likes of the Rangers and Penguins.

But the Bruins are a scary bunch. They have all the tools to be a successful playoff team and are a team that will battle for every piece of land out there. Brad Marchand and Milan Lucic have lead the charge with their hard-nose play, while David Krejci and Nathan Horton have produced fantastically for the Bruins this post season.

When it comes to defense, you can't bet against Zdeno Chara, who provides pleny of intangibles, but with Torey Krug coming on like a house of fire this post-season has been a great surprise. With Johnny Boychuk and Adam McQuaid holding down the fort in their own end, the Bruins seems impenetrable.

And even if they get past them, Tuukka Rask shut down one of the most prolific offenses in the NHL today last round and has had plenty of support to help him along the way. One big thing is that he has been strong mentally, not letting the junk in front of the net or a bad goal get to him and making him bust out into his rageful mood. 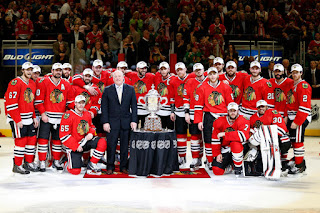 Out of the West, the team that has been one of the top teams from start to finish-- the Chicago Blackhawks. Much like the Bruins, they've had to come back from a series-- granted they were down 3-1 and not up--and have showed their guile and depth, especially with their top players not filling the net as many would have hoped.

In that, I mean that Jonathan Toews and Patrick Kane haven't been setting the scoresheet on fire, sans Kane's last game in the Conference Finals with a hat-trick. That said, the scoring has been spread around, making the offense a decent threat regardless of the line out there.

Defensively, the Blackhawks have had it a little rough, with Brent Seabrook not having the best playoffs-- but Johnny Oduya coming up clutch for the Blackhawks in their own zone, as well as making that first pass to create offense. Michal Roszival has also played rather well on the third pairing. Duncan Keith, despite the one-game suspension, has been the offensive leader on the defense.

In net, Corey Crawford is looking like Antti Niemi did when he was in net for the Blackhawks' Cup run in 2010 (observation by Lyle Richardson). While he hasn't been extremely extraordinary-- he has gotten the job done and been able to get the wins needed to get the Hawks to this point. He's not the most flashiest and may give Hawks fans fits, he has gotten the job done in a big way.

So, prediction time: Boston is very scary. They have all the tools needed in order to actually take this series handily, but Chicago won't let their record start be tarnished with a pathetic showing at the end of the year.

With that all in mind, I feel the Blackhawks will take Lord Stanley's Cup in six games.
Posted by ScottyWazz at 9:13 AM